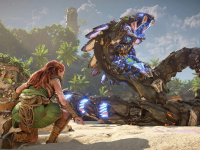 Here we go with one more look at the machines coming to Horizon Forbidden West and this one highlights the one that seems to slither into each of the past videos without much to go on. That could be due to the fact that Guerrilla Games is trying to keep surprises for the February launch on the PS4 and PS5. Those surprises be damned, now, with a new look at the Slitherfang coming at us in Horizon Forbidden West This is the snake-like machines we have seen Aloy facing off with in many of the other videos, but now we can see it directly here. Albeit with no real explanation on how or why it is functioning in this world.

So, what we have here is not a deep dive into the machine either, but more of the perils of the Forbidden West that the game gets its name from. The Slitherfang looks to be just as agile and aggressive as a cobra looks like it would. It also seems to have the traditional fangs that shoot out venom or acid of some sort. Beyond the combat capabilities of in Horizon Forbidden West, I am not certain why the machine would have been built in this way, but it does make for a formidable foe here. Something that we and Aloy will most likely need to take down many times over once February 18th rolls up on us and gives us this new title.

Rise Above Our Ruin

Check out the new gameplay of the Slitherfang in the wild.

In the Forbidden West, awe-inspiring machines rule the lands. These technologically advanced robots have become Earth’s dominant species and pose a serious threat throughout Aloy’s mission.

In this special short, catch a glimpse of both new and returning machines in Horizon Forbidden West.

Do you like how the Silverfang looks and feels in the Forbidden West or will you be waiting to see something else brought to life? Do you think we will have a better explanation for this machine's design in the world or will it just make for a fun video game instead? What other machines do you want to see a specific breakdown for and will we actually get them all in a direct way? Let us all know what you are thinking down in the comments and then feel free to discuss it all. More for Horizon Forbidden West will be on its way soon. All you need to do is keep checking in for all of that and everything else we will have to offer up for you.