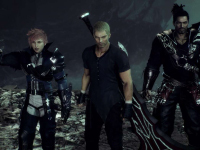 The Final Fantasy job system is back and we have a small taste of the jobs we will swap in for Stranger Of Paradise: Final Fantasy Origin

It was mentioned it was coming, and now we have a little bit of a look at the job system in Stranger Of Paradise: Final Fantasy Origin to get us ready for that March 18th release date that is right around the corner. A new system that looks like Team NINJA is paying a bit of homage to the original Final Fantasy systems, but also making sure that it feels just at home in the current state of the games out there. That is, it looks like we will not be pigeonholed into just one job for the entire game. Not only that, but it looks like we will be able to hot-swap through them as we need them and the specific abilities in the game.

In the following videos, we get a look at the return of the Duelist, Pugilist, Marauder, Ronin, Swordfighter, White Mage, Red Mage, Thief, Berserker, Samurai, and Dragoon as they make their way back into the Final Fantasy space. The details and specifics on what they can do in the context of this title are still murky with little detail. We just get to see them and then try to understand why they are all broken out in Stranger Of Paradise: Final Fantasy Origin if we can go to them at the push of a button. Why not just make it the basic skill tree and call it a job tree? This takes away from the need to specialize and go down a specific path if there is no limitation on how we can swap between them. Even if it were something that could only be done at certain spots, it would make more sense. This just seems like adding in more labels with not much of an explanation on why.

In Stranger Of Paradise: Final Fantasy Origin Jack can switch between two jobs at the push of a button.

Whether your power lurks with the Thief job or hitting like a truck as a Berserker, there are plenty of different combinations to mix and match to better help crush your foes.

Invest time into the jobs available in Stranger Of Paradise: Final Fantasy Origin and Jack will soon unlock more advanced roles to play.

Will you become the definitive Jack-of-all-trades as a Red Mage, slice through the darkness as a Samurai, or get the Jump on foes as a Dragoon?

In Stranger Of Paradise: Final Fantasy Origin Jack’s strength lies in his versatility.

Early in his quest, he'll have access to basic jobs like the fist-throwing Pugilist, the quick-footed Duelist, and the ax-centric Marauder.

Which Chaos-conquering Job will you master first?

Beyond linking the game back to the other Final Fantasy titles, do you see the need to have a job system here? Would it make more sense if we could only set our job at an inn and only be able to swap there to another job? Will this just be a very convoluted skill tree that was just poorly named? Give us your thoughts on this down in the comments and then feel free to discuss it all. If we have more to share for Stranger Of Paradise: Final Fantasy Origin, and we know we will, it will be up on the site as soon as possible. All you need to do is keep an eye out for all of that and much more as we head on to all of those game releases.