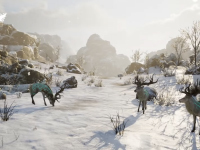 There is no doubt that since the Unreal Engine 5 was showcased that we were not going to start seeing some titles coming along for it in short order. Most of which have seemed to be tech demos or something along those lines, but it looks like Ashes Of Creation will be heading right down that path by getting the full upgrade down the line. When that will be is still anyone's guess, as Intrepid Studios just made the announcement that work has started. Just know that Ashes Of Creation will be getting the UE5 overhaul down the line and we can get a short look at just how it could pan out on our PC.

It is still going to be a bit of time before the entire world of Ashes Of Creation is ready to explore, but it looks like some strides have begun. It does feel like we are seeing more in terms of the lighting and particle effects in the world over raw graphical output as other demos or showcases have done. Ashes Of Creation is an MMO after all, so it makes sense that we would not be seeing the photorealist visuals here. It just feels like if the UE5 tag at the beginning of the video was not there, we really would not have that feel for the next-gen engine that has so many heads turning right now. Have a look and see if you agree with that for now.

Intrepid Studios is extremely excited to announce that they are developing Ashes Of Creation on the Unreal Engine 5! This video is a preview of what's to come.

A reminder that Ashes Of Creation is an open and transparent development project. As such, you will see work-in-progress art, systems, and mechanics.

Do you think games like Ashes Of Creation need to get bumped up to this version of the engine or will it feel wasted once it is there? Do you think that it will be more on the network side of it all where we see the vast improvements or is it just too soon to see anything for the visuals? How many games do you think will have another release due to the need to upgrade to the next engine in the line? Let us all know down in the comments what you are thinking and then feel free to discuss it all. If we have more to share for Ashes Of Creation, we will obviously drop it on the site. Please keep checking in for all of that and more.