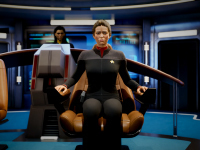 The Star Trek universe will expand a bit more with the new narrative title announced by the way of Star Trek: Resurgence

It feels like it has been some time since we had a fun and full Star Trek video game to enjoy and explore. I know there have been a few of the smaller and mobile titles out there, but it looks as if Dramatic Labs is going to end that drought for those looking for something big on the PS4, PS5, Xbox One, Xbox Series X, and PC. Here we go with the announcement for Star Trek: Resurgence that will place us in the mix of being the captain out there and aiming to save the universe. You know, the normal thing that we have to worry about when heading into the exploration utopia that the IP has usually been out there.

You can see a bit of Star Trek: Resurgence in motion just a bit lower down. It may look like a bit of an action title out there, but it is more of a title coming from those minds and developers than brought us the narrative games for The Walking Dead and Batman. Not specifically the same studio as before, but part of the teams. No matter how you look at it, it will be a narrative game in the Star Trek realm from those that know how to do it well. Not to mention that it looks like we will have some other action beyond the basic QTEs that we had from before. It is time to pull out those uniforms and set phasers to kill or something…

Star Trek: Resurgence is an interactive narrative video game that tells an original story set in the era shortly after the events of Star Trek: The Next Generation. Stationed aboard the U.S.S. RESOLUTE, players will assume the role of two principal characters, First Officer Jara Rydek and Engineering Crewperson Carter Diaz, as they unravel a sinister mystery involving two alien civilizations on the brink of war. Throughout the game, players will immerse themselves in the Star Trek universe, interacting with new and returning characters through a variety of dialogue and action gameplay to determine the course of the story.

Have you been craving a new Star Trek video game out there and will this one scratch that itch? Does it sound promising to have the minds behind those other titles here or will that just be something to further hype the game? When do you think this game will take place out there and will it build into any of the ongoing stories out there? Feel free to let us all know down in the comments what you are thinking about all of this and more. If we have more for Star Trek: Resurgence, know that we will share it all here for you. Please keep a close eye on the site for all of that and much, much more.