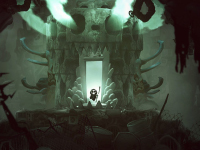 Have A Nice Death

Those that may be wondering how Death handles the day-to-day of the job out there will soon have some form of answer out there with the announcement that Have A Nice Death is coming. A new title from Magic Design Studios and Perfect World for the PC that will have you rolling with Death in a 2D action rogue-lite setting. All of which is punctuated more with Have A Nice Death having a fun hand-drawn style to everything in the mix of setting things right in Death Incorporated. It might not be every day that the CEO needs to step in, but that is what we have going on in the game here as far as some of the story goes. I am sure there is much more to it all.

In fact, we have a little more to Have A Nice Death beyond that, even if it is on the lighter side. As we head out there to correct all of the sorrows of the world, we will have some new levels, enemies, and bosses to fight that are themed around the various reasons humans have been dying and leaving loads of paperwork on Death's desk. Some of them feel like it could be a little soon, as Have A Nice Death looks to have something dealing with disease. March is still a bit away, so maybe things will calm down by then and none of that will hit too hard for a title that looks like it will have the Metroidvania feel to it all as we try to bring the death rate under control.

Have A Nice Death — Announcement

Have A Nice Death is a hand-drawn 2D Action Rogue-Lite where you play as Death, Founder and CEO of Death Incorporated—a sprawling corporate empire that processes souls for the afterlife—who currently finds himself teetering on the edge of burnout. His top executives, the Sorrows, have been running rampant on Earth’s surface, blatantly ignoring company protocols, leaving him buried in an underworld-sized mountain of paperwork. Now, in order to regain control of his company and soul-ply chain, as well as secure a much-needed vacation, he will need to traverse the various departments of Death Incorporated and remind his unruly subordinates who’s boss.

Do you like the look and feel for Have A Nice Death that we have here and will it flow just as well when it launches? What other Sorrows do you think we will see beyond Disease and War out there? Could some of this be a little "too soon" for the masses out there or will us levelheaded gamers be able to deal with it all and just have fun? Give us all of that feedback down in the comments and then feel free to discuss it all. More for Have A Nice Death has to be on the way, and we will share it all here when it does. Be sure to keep checking back in for all of that and much, much more.