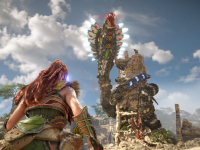 With February 18th creeping up for us all and the release of Horizon Forbidden West coming so fast, we will need a good look at some of the gameplay in the mix. Not only that, but also a solid look at how Guerrilla Games is building upon the winning formula that they had out there on the PS4 and PS5 already, we need something new to look at. All of which is something we have in spades as we have a new look at the threats we will have out there for Horizon Forbidden West now. Even if we all have a bit more of the original in the mix along with some of the fun new machines that will be hunting us all down in this western adventure out there.

It does look like Horizon Forbidden West will have some new snakes and tentacle monsters out in the mix along with some new aquatic machines out there too. Some of them look to be boss-level machines and others look to be more of the basic enemies in the mix. It does look like we will have many more weapons and skills to use to help bring them down in Horizon Forbidden West too, thankfully, so it should be a bit more balanced. Now if we could only get some live gameplay and not heavily edited to make the spectacle bigger than ever. None of that will lower my excitement for this title to launch out there.

Rise Above Our Ruin.

Horizon Forbidden West is coming to PlayStation 4 and PlayStation 5 consoles on 18 February 2022.

Join Aloy as she braves more dangers in the Forbidden West and tries to find answers to save the Earth.

Are you enjoying the little looks at the new enemies we will have in Horizon Forbidden West and will they cover more of the dinosaur types over time? Do you think we will have new human enemies out there or will this focus more on the mechanical ones this time? Will each have vastly different ways to bring them down or will some of them feel like the same rote motions between them all? Tell us all of your thoughts on this down in the comments and then feel free to discuss it all. More for Horizon Forbidden West is coming, so be sure to keep checking in for all of that and much, much more.