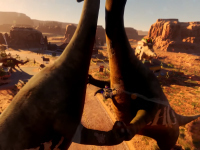 The gameplay keeps flowing out there for Saints Row with a bit more now. Even if we have to wait until August 29th to get the game, that does not mean that Volition is not trying to drop much more on us here. This one goes a bit further into the different Saints out there and how we will be able to alter their looks along the line of the game. More of the customization options we will have in this Saints Row to keep things feeling fresh and give us a reason to run around the world beyond just killing our enemies and having fun. The same thing that we have had in the IP for a while, but with the next level stuff that can be offered up as of now.

On top of the character outfits, we have a few new vehicles and story moments in Saints Row too. It is interesting to see that some of the elements feel like they are fitting in the most recent titles in the line that have been more on the fantastical side of things and not anything that could be grounded in reality. Not that we could ever expect the Saints Row titles to be listed as a realist title out there. Even before they started going to space and Hell out there. It does make for a fun game, so there will not be any complaints about any of that. I know I just want to see the visuals to be updated to the current state of things, which could be done in the time that we have had for the delay.

Officially revealed at The Game Awards, our brand new Saints Row gameplay trailer gives you a glimpse of the crew’s journey to Saint-dom, sneak peeks of customization, and buckets of those only-in-Saints-Row moments you know and love.

In Santo Ileso, you either have the power, or you want to take it. The Saints are on a path to dominating this city, and you need to lead them as whatever Boss you want to be, this is Saints Row after all. We are serving up Saint-on-faction action as we show off just some of the ways you can head off against your rivals – there are so many options from explosive weaponry and brand new guns to an up-close and personal takedown or swift melee assault. The many ways to dispatch your enemies to the Santo Ileso in the sky isn’t all we’ve got in our arsenal, we’ve got high-speed vehicle action including boats, cars, ariel assaults, and of course, chaos-inducing tanks.

In just 2 minutes you are gonna see:

How are you feeling about Saints Row here and do you like the visuals that we have right now? Do you think we will see a vast customization mechanic here or will it just be a basic version based on what we have had over the years? Will the vehicles and weapons be over the top again or will some of them be grounded out there for this one? Tell us all down in the comments and then feel free to discuss it all if you so wish. We will keep sharing what we can for Saints Row here on the site, so be sure to keep checking in. There will be a lot more as we get closer to the launch of it all.