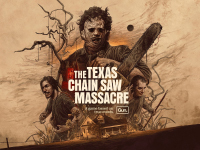 Here we go diving into more of the horror IPs out there with The Texas Chain Saw Massacre getting its own video game now. A video game from Sumo Nottingham and Gun Interactive, creators of Friday The 13th: The Game. Yes, this means we are getting another classic IP out there in the multiplayer style of things. This is what they do here and it seems to be going well. If it was not, we would not be seeing The Texas Chain Saw Massacre heading to the PS5, Xbox Series X|S, and PC in the future. All so we can have more of this skewed history out there to kill our friends and strangers with.

There is not much here to go on for The Texas Chain Saw Massacre game given that we have a cinematic, but my guess is that it will be the next iteration of the other many versus one style of games we have had. Maybe we can see some of the other villain characters from the IP in the mix, but I am going to guess one player will be Leatherface and the others will play survivors trying to escape. I do hope that we will see more of the hidden passages and such in this one than the teleportation aspects we have seen in the past. It is a bit more on the workload to build levels like this, but it would fit The Texas Chain Saw Massacre setting better. Maybe we will see some gameplay soon so we can see if it will be original or just based on what worked well before.

Gun Interactive, creators of Friday The 13th: The Game, and Sumo Nottingham are excited to announce The Texas Chain Saw Massacre, an authentic gaming experience based on the groundbreaking 1974 film.

Was it only a matter of time for The Texas Chain Saw Massacre to get the video game treatment here or was this a huge surprise to you? Would you like to see the levels and environment used more in the game or would teleportation for Leatherface work better for gameplay? Do you know the events all of this is based on or do you still think that these all took place in a little place in Texas? Give us all of that feedback down in the comments and then feel free to discuss it all. I know there will be more for The Texas Chain Saw Massacre out there, so be sure to keep watching the site and socials for all of that. We all need more of our horror out there.