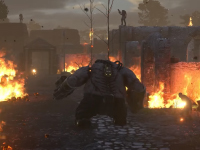 More of the explosion and insane fun is on the way to us all for the holidays here with Serious Sam 4 hitting the PS5 and Xbox Series X|S as of now. At least in an official capacity and not just running through the backward play. Croteam could have just left it that way for now, but Serious Sam fans need their fix and it is here to enjoy. This is also good news for those that may have missed the mark when it dropped out there before on the other platforms before now. As long as you have had the luck of scoring one of the new systems. You could always just default back to the PC version for the fun, though.

Serious Sam 4 is also out there on Game Pass too, so you can take advantage of all of that. For those that need to have a little more of the detail to it all, you can see it in motion just below. It does not look like much has been upgraded based on this video, but that could be just how the compression of the video goes. No matter the case, have a look at the new trailer for Serious Sam 4 and then head out to pick it all up. Hopefully it will not just end up in the backlog and you will be able to ride all of those explosions into the fun you want. Even if it does feel like it could slide into the backlog as they always do.

Humanity is under siege as the full force of Mental’s hordes spread across the world, ravaging what remains of a broken and beaten civilization. The last remaining resistance to the invasion is the Earth Defense Force led by Sam “Serious” Stone and his heavily-armed squad of misfit commandos.

Croteam returns with a high-powered prequel to the Serious Sam series that scales up chaos to unprecedented levels. The classic Serious Sam formula is revamped by putting an unstoppable arsenal up against an unimaginable number of enemies that requires players to circle-strafing and backpedal-blast their way out of impossible situations.

Were you waiting for Serious Sam to hit the next-gens like this or have you been in on it all before now? Do you think the game will look better in real-time or will it just be the same but running natively? Could we all see the next title in the line on its way or will we just see the riding of the classics for the foreseeable future? Let us all know down in the comments what you are thinking and then feel free to discuss it all. If there is more for Serious Sam 4 or the IP in general, we will share it all here. Just be sure to keep a close eye on the site to see and hear it all.