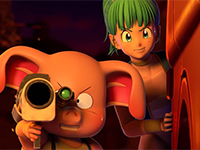 A new Dragon Ball title is announced with Dragon Ball: The Breakers offering us a vastly different game than we could have expected

When we hear something about Dragon Ball when it comes to gaming, we generally go to the arena of a fighting game out there. It is a safe bet as that is what we generally get from Bandai Namco and the IP does lend itself to it fairly well. Now we have another title in the mix of the IP from DIMPS and it sounds like things are going to be a bit different here. Welcome to Dragon Ball: The Breakers which will be an asymmetrical multiplayer experience for the PS4, PS5, Xbox One, Xbox Series X|S, Switch, and PC set in the universe. Now that is quite a shift from what we normally get out there for all of this, is it not?

In Dragon Ball: The Breakers we will either be taking on the role of a survivor or a raider. The raider is out there to kill and consume everything to get their power level up and make it easier. The survivors are to do what they can to make sure that does not happen and that they can evacuate the planet. All of whom are from the Dragon Ball Xenoverse line of games and will have some of the skills and abilities we could expect them to have to help further the survival. It does sound like a fun take on the IP and the following gameplay does show off how intense and fun some of these matches could be. As long as they have figured out a way to make this style of game last longer than a few months before feeling stale.

Survive to live. Evolve to triumph.

Dragon Ball: The Breakers, a new asymmetrical multiplayer online Dragon Ball game, will be coming to PlayStation, Xbox, Nintendo Switch, and PC in 2022!

A Closed Beta Test will be held soon, so stay tuned!

Was this the Dragon Ball title you were expecting to hear here or is this a nice deviation from the formula? What other characters do you think we will see as survivors or raiders and how powerful will they all get? Do you think this will carry over any of the other narratives out there or will all of this be a standalone afare with no real barring beyond fun? Let us all know what you are thinking down in the comments and then feel free to discuss it all. If we have more to share for Dragon Ball: The Breakers, it will be here on the site. Please keep checking back in for all of that and much, much more as we head on into the future of it all.