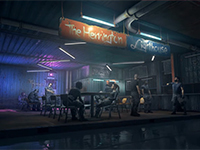 One more little developer diary for Dying Light 2 is here to shed some light on more of the survivors out there and how they end up going back to what they know. It is an interesting take on humans here from Techland here, as the game is taking place fifteen years in the future since Dying Light. The odd thing is that while the humans do seem to try to be getting back to their normal out there, they have not tried to rally behind getting the world back up and running as it was. As in they are still scavenging and using whatever is still out there instead of just rebuilding and restoring. An odd thing, but maybe we will have a better understanding of it all when the game hits the PS4, PS5, Xbox One, Xbox Series X|S, Switch, and PC on February 4th.

While that seems like a weird thing to see here for Dying Light 2, there is a bit more out there on some of the factions and characters we will meet out there. More of which in how Aiden will be shaping the world out there by our actions and choices. Something that could give some factions more power out there and thus more story to see and hear from the areas out there. Some of it all comes from the environments and not directly in dialog and collectibles out there in Dying Light 2. We are going to need to keep our heads on more of a swivel in the game for all of this and the infected more than we thought. At the very least, it will have us out there for more plays of the game than just the one.

In the latest episode of Dying 2 Know More, Thomas Gerbaud, World Director of Dying Light 2, talks us through The City and its people in greater detail. Following the Fall of civilization, people have come together to create a new civilization and way of life in the face of the infection. Players will discover this world and its inhabitants through Aiden’s eyes, with the consequences of his actions disrupting their everyday lives.

Is it weird that the humans of Dying Light have not truly tried to recover from it all or did all of the world's engineers just die? Will you be trying to play all of the different aspects of the game or will you be able to do it all in one shot? Which faction do you think you will go with in the game or will one of them always be the enemy out there? Let us all know what you are thinking down in the comments and then feel free to discuss it all if you so wish. We will keep all of the news and updates for Dying Light 2 flowing to you out there as best we can. Just be sure to keep checking back in for all of that and much more.