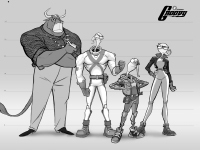 Earthworm Jim is on the way back with the announcement of a new TV show titles Earthworm Jim: Beyond The Groovy

It is time to ask what year it is again, as it looks like Earthworm Jim is on the way back to us. Only this time, he is on the way back with a new animated TV show that is in the works. No, we are not getting any kind of new video game out of Interplay here, but the animated show from 1996 is getting a bit of a reboot here. A reboot in the way of Earthworm Jim: Beyond The Groovy that will carry on the fun and humor some of us grew up with back in the 90s there. More of the nostalgia kicking us in the teeth as we get ready for all of the humor and fun some of us might be able to remember out there.

Not much else is known about Earthworm Jim: Beyond The Groovy at this point, but at least we all know it is coming and that the team that has been behind the IP forever is working on bringing it to us again. It looks like the animation will be beefed up a bit and that this version of the show might go with a little more of an edgier line than before. I have a feeling it will keep much of the humor that Earthworm Jim has had for a while, but the following interview video does give off a vibe that things might be a little more mature. I still have a feeling it will be made with as many ages in mind and not just for something that only adults will truly be able to enjoy, though.

Last seen on TV in 1996 after a successful run of 23 episodes on the WB Television Network, the new series follows the adventures of Jim, a worm in a robotic suit who fights a plethora of eccentric enemies. It will feature a host of new faces as they navigate an absurd, hostile, and colorful galaxy, where each planet is home to a race of anthropomorphic animals. Jim's ultimate quest is to find his true home among the stars: a near-mythical planet called Earth.

Was this the news for Earthworm Jim you have been hoping for or is it a little out of left field for you? Did you watch the original cartoon from before or is this the first you are learning of that existence? Do you suspect that it will be geared more toward the fans from the 90s or will it aim for the broader audience and tone some of the humor down when it launches? Tell us all that you have to think about this down in the comments and then feel free to discuss it all. We will bring you more for Earthworm Jim: Beyond The Groovy as we get it, so be on the lookout for all of that and much more on the site.