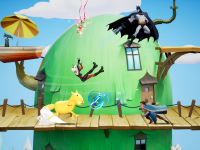 A new brawler, MultiVersus, is announced with MultiVersus bringing all of the Warner Bros. properties into the fights now

It looks like some of the rumors were true and a new Warner Bros. brawling game is coming with the announcement of MultiVersus. This is a new Free-To-Play brawler from Player First Games to let us take all of our favorite characters into a fight outside of the others out there. The bigger difference for MultiVersus is that we will have all of the properties they own in the mix and not just the comic heroes and villains. Yes, get ready to see Shaggy fighting Arya in the mix while Batman helps him and Jake helps here. All in 2022 for the PS4, PS5, Xbox One, Xbox Series X|S, and PC. We will finally get to answer some of those questions out there.

As you will see in the mix below, MultiVersus will be a title much like the other "Brawl" titles out there but will offer up options for characters to team up and work together for the win instead. It also looks like MultiVersus will be a cross-platform and cross-progression title to experience even in a solo mode if you so choose to. That and with all of the various characters from Batman to Finn to Bugs Bunny as well. More of those characters are still yet to be announced along with the various skins we will have to put them in as we unlock it all. Have a look at the basics and then wait to see if the Play Tests will give us a chance to have the mash-up title that has been rumored and now brought into reality.

Worlds will collide like you’ve never seen before! Here’s your first look at the free-to-play platform brawler, MultiVersus!

MultiVersus is a new platform fighter that lets you team up with or against your friends as some of the world’s most iconic characters including Batman, Shaggy, Superman, Bugs Bunny, and more. Use unique co-op abilities, find your favorite fighter combos, and save the Multiverse!

Cross-platform and cross-progression, MultiVersus will be coming in 2022 to the Playstation 4, Playstation 5, Xbox One, Xbox Series X|S, and PC.

Were you expecting to see a title like MultiVersus in the mix out there and will this be how many other "universes" will go down? What characters do you expect to see in here and will we get any of the more obscure Warner properties in the mix? How long do you think that it will stay as a free-to-play title or will it be character DLC to make the money to keep the dedicated servers running? Let us all know down in the comments and then feel free to discuss it all if you so wish to. We will keep a close eye on MultiVersus and share all that we can for the game. All you need to do is keep checking back in for it all. We will have what we can share as fast as we can.