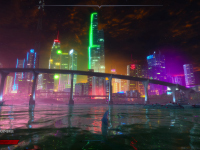 Here we go with another massive update coming to Maneater to give players all one new thing to look at in the game. Given that Tripwire Interactive has confirmed that there have been over five million gamers that gave this shaRkPG a chance, it makes sense that they have not just left the game dead in water. In fact, those looking to experience Maneater one more time on the PS5 and Xbox Series X|S will be able to do so right now and with Ray Tracing added in. Yes, the water and other elements in the game that could benefit from this now have it and we can head out to hunt for more blood and body parts in the bays again. That or keep going about it as we never stopped in the first place. All of the shark puns here.

We do have a very short video just a bit lower down to see how Maneater is going to look with this new update, but there is a little more to note before you move along. While the other platforms that the game runs on will not get this same update due to hardware limitations, there are a few other optimization and stability improvements for them too. Nothing too major to write home about, sure, but worth noting so you know you will not be fully left out on Maneater if you have not been able to get the latest and greatest hardware out there. This goes for those PC gamers too. Even if most of that is not truly detailed and dwarfed by the showing of the Ray Tracing we have right now.

Developer and publisher Tripwire Interactive is proud to announce that over 5 million players have dared to enter the deep waters of Maneater, the award-winning Action-RPG where you play as a shark (aka shARkPG). Since its initial launch in May of 2020 and the subsequent release of the Maneater: Truth Quest downloadable content (DLC) in August of 2021, millions of players from around the globe and across all platforms have eaten, explored, and evolved as the apex predator of the sea. To celebrate this fin-tastic milestone, Tripwire Interactive is launching a free Ray Tracing update today. Built from the ground up for Xbox Series X and PlayStation 5 systems, today’s Maneater update brings the Gulf Coast to life by enhancing the realism and appearance of real-time reflections on the surface of water as well as the refractions above when looking up from below.

In addition to adding Ray Tracing support for Xbox Series X and PlayStation 5, today’s Maneater update also delivers a wide array of quality-of-life and optimization improvements designed to improve stability and performance across all platforms, including PlayStation 4 and PlayStation 5 computer entertainment systems, Xbox One and Xbox Series X|S console systems.

Does this make you want to play through Maneater once more or will it give you another reason to go for the DLC? Do you think this success will have the team working on more DLC or will it end up getting us a whole new title in the line to enjoy and keep the fun going? Can you truly see the difference in the visuals here or will you need to play it live and uncompressed to fully appreciate it all? Let us all know down in the comments and then feel free to discuss it all. When we have more for Maneater, know we will share it all here. Please keep checking back in for all of that and much more as we head on into the future.