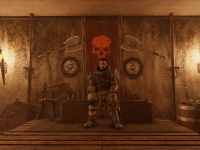 We just had a look at the physical extras for ELEX II and now we get to see how some of it will work with the factions in the game. This time around, we will have five different ones to choose from in the game and further the goals out there. Not anything too different than what Piranha Bytes has us do in the last ELEX, but there will be some new twists to things to keep things fresh. We now get to see some of them to get us ready to take on our role in the game when it lands on March 1st out there. That is a bit of time to make sure we get it all correct and make the right choice for ourselves, is it not?

There is not much in the way of what each of these factions will offer you in ELEX II, but I am guessing it will fall in line with weapons, armor, and other gear that will fit the setting of each. It will also most likely skew some of the social interactions with others out there by choosing one over the other too. It does not look like it will change the look and acting of the characters in ELEX II, which seems to be on the wanting side of things here. It feels like a step back for the PS5, Xbox Series X|S, and PC here. Which is odd given the amount of time that we have had since the last title dropped out there. Have a look and see what I am talking about here.

The Skyands are coming — and we need to defend Magalan. Stop fighting each other and focus on the real enemy of our world!

So go out there and convince the free people of Magalan to join the 6th Power before it's too late. Albs, Berserkers, Clerics, Morkons, and Outlaws — UNITE!

Do any of these factions for ELEX II speak to you or will you need more to go on before making the choice here? Is it odd to see how downgraded the visuals for the game are here or is it all for the current build with things to get better later? Will these different factions alter more than just our character's look out there instead? Let us all know what you are thinking down in the comments and then feel free to discuss it all. For more on ELEX II, please keep checking back in here for all of that. We will keep the news all flowing to you as best as we can for it all.