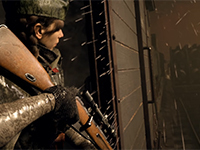 The PC specs for Call Of Duty: Vanguard are here along with a look at how this Call Of Duty could look when it launches

There has been a whole lot to look at for Call Of Duty: Vanguard when it comes to the PS5 and Xbox Series X versions of the game, but not much shown for the PC side of things. We all know that Sledgehammer Games is not going to let that be the slacker of the platforms out there when it hits on November 5th, we just have had a whole lot of gameplay captured on the consoles first. Now, we have a look at how Call Of Duty: Vanguard could look on the PC if we have all of the general specs and hardware needed to run it all. The true issue that PC gamers could have out there but most will not. They always do need to have those 4K visuals, Ultrawide Aspect Ratios, and Custom Performance options that the consoles are generally lacking out there. Now we have a little tease to give us just what some of us have been craving.

While you can see it all in action just a bit lower, the bigger thing to take note of will be the PC specs for Call Of Duty: Vanguard here. Those are also listed to show off the minimum setup you need for your hardware as well as what should be needed to run it at the best version of it all. Outside of the limitations of availability of the 3060 and higher video cards out there, it is not too much of a beast to get this up and going on Ultra settings out there. Not that the Call Of Duty line ever has been that rough on the spec side of things, but it is worth noting if you have been having issues getting a hold of any of those video cards out there as of late. Some might think it a bit easier to just go with the consoles at this point and wait for things to die down on that front for now.

Hi-Rez Assets Cache is optional disk space that can be used to stream high-resolution assets. That option can be turned off in the game's settings.

Are you ready to give this Call Of Duty a go on the PC here or will you need some upgrades to play it on the PC? Do you think the consoles will have most of the abilities the PC will have or will they miss out on things due to the other hardware limits out there? Do you need your video games to have the best visuals out there to be able to enjoy them or will it still boil down to the mechanics of it all no matter what? Let us all know down in the comments what you are thinking and then feel free to discuss it all if you so wish to. We will have more for Call Of Duty: Vanguard as we get closer to and past the launch date. Please check back for all of those updates and much more that will be on the site here.