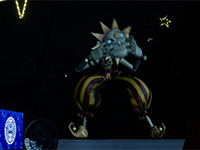 The break is almost here with the latest for Five Nights At Freddy’s: Security Breach out there now. That would be that Steel Wool Studios is ready to give us the release date for the game on the PS4, PS5, and PC. It would have been fun to have it during the Halloween season this year, but now it looks like we will have Security Breach for a different part of the holiday season. The release date is now set for December 16th out there as we can start all the work to make sure we survive the nights. Why we go back after night one is still a weird thing to me, but then we would not have a game out there if our guard did not.

To go along with this new announcement for when Security Breach will be out there, we have a new look at a mix of gameplay and cinematics for the game here. There is a mix of the characters out there that could be stalking us or helping us along the way in the story. Also, how it will go down when we climb into Freddy's body for protection and to move about the world safely. I have a feeling it will be extremely limited out there in Security Breach or we would just stay in it all the time. Why would we not? Especially with all of the true horrors hunting us down in the building. Have a look and see just what we can expect to play in the mix of things here.

Gameplay and release date for Five Nights At Freddy’s: Security Breach. Coming to the PS4, PS5, and PC on December 16th, 2021.

Do you think we will only have a short amount of time in the costume here or will it only be during specific portions of Security Breach? Do you think that the various animatronics will always be helpful or will they flip back and forth depending on if we are a kid or the security guard? Do you think it would have hit better if it dropped on us during the Halloween weekend? Let us all know down in the comments and then feel free to discuss it all if you so wish to. We will keep the news for Five Nights At Freddy’s: Security Breach flowing out there as fast as we get it. Just be sure to keep checking back for all of that and much more as we head toward December.