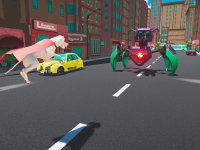 DC League Of Super-Pets: The Adventures Of Krypto & Ace was announced during DC Fandom to bring fans of the Super-Pets a small game they can enjoy

During this year's DC Fandom, there was an animated film announced and that also means it was high time for a DC League Of Super-Pets: The Adventures Of Krypto & Ace video game to get the announcement too. We need to have ways to make sure all of the weird and lesser-known aspects of the DC comics are covered here and Outright Games is going to offer all of that up for us here. All so we can keep the fun of the Super-Pets film that is due out in the Summer of 2022 going just as strong as the protagonists of it all. That is also probably the safe bet on when we can expect to see this video game version lad too. It feels like it is going to be close to a film tie-in more than anything most of the DC fans out there have been used to as of late.

All of this is mentioned here due to the fact that the announcement we do have for DC League Of Super-Pets here does feel extremely close to a film tie-in of yore than a truly solid new game. It even looks and feels more like a mobile game than anything but it is slated to hit the Switch, PlayStation, Xbox, and PC platforms when it does come. All so we can join Krypto and Ace as they fly through the air and take down giant robots and other bad things out there. All so they can keep the pet population of Metropolis secure and safe. Just in the way that the Super-Pets normally should. As long as you like seeing the animal sidekick versions of your bigger DC characters out there in the mix and all.

DC League Of Super-Pets: The Adventures Of Krypto & Ace — Announcement

The reveal of the DC League Of Super-Pets video game that has been announced at DC Kids Fandome will put players in the paws of Krypto and Ace as they take to the skies to protect the animal population of Metropolis from a new and looming threat!

Did you expect to hear about a DC League Of Super-Pets video game here? Do you agree that it looks like it is going to be something to tie into the film and not much more? Would you want to see the cast of this game show up in the darker titles that we are used to already? Let us all know down in the comments. There should be more for DC League Of Super-Pets: The Adventures Of Krypto & Ace and I will do what I can to get it out there for you. Please keep checking back in on the site to see all of that and experience it all. You should not be disappointed too much by what we have to offer up.