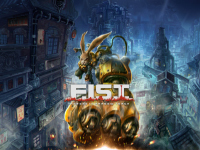 We sit down and review F.I.S.T: Forged In Shadow Torch. A Metroidvania title that brings us a rabbit with a huge robotic fist. Here is our review of F.I.S.T

In the world of FPS and dark and gritty shooters, it is nice to every now and then go back to what made video games great and that is the goal of F.I.S.T: Forged In Shadow Torch. This would be the most recent title that TiGames put out there on the PS4, PS5, and PC to give us all a true Metroidvania title to enjoy. It also helps that the game mixes in some craziness like anthropomorphized animals that have some kind of cybernetics mixed in. In this title's instance, it is the F.I.S.T. Now we get to share with you if it work, failed, and was at the very least fun to play. Here is our final review on how this title shapes up for the masses out there.

Rayton is just your average anthropomorphic rabbit in the world that was once an ace pilot for some mechs out there in Torch City. Things are not the best in the city, but Rayton is making due. That is until the robot Legion stirs things up and Rayton has to go all-in on liberating the population from these oppressors while saving a few friends along the way. It is a good thing that Rayton knows how to use a F.I.S.T. or this would be one rough fight to have out there. Now there is only one true way to see how it will all shake out. To start things off, I am going to have to dig into one of the most frustrating aspects I found in F.I.S.T: Forged In Shadow Torch here. This would be the fact that some of your moves and abilities are tied to meters that need to be filled up and some can mainly be done through combat. Not something that one would find to be a huge issue as that would keep a player from smashing the same move over and over and push for some form of interaction with the full game. If that were the only case, it would not be listed here. Some of these abilities, while useful in combat, also need to be sued to traverse and reach new areas in F.I.S.T. Some of which will also require you to move through respawned enemies to get to. Some of those enemies will also burn through these meters leading to a hunt for more fighting or backtrack to a safe room that will restore it all. I ran into this so many times that I just gave up on exploring parts of the map given that some of these locations were also tricky to get to and could require multiple attempts. This was not a case of not having the skill, I will own up to some of that, but in terms made it difficult to even try to get better with it all in the game.

Building from that, and partially some of the above issue in F.I.S.T, is the fact that the UI and controls to shift between tools and options for the weapons were rather clunky. During the game, the mechanical fist is upgraded and you earn new attacks, weapons, and abilities. Sometimes a big drill is needed instead of a fist, or a set of whirling blades to help out. These require different "stances" for Rayton and once in them, it is fairly obvious. Given how you shift them with the controls in F.I.S.T., and how quickly it is needed to be done, you can find yourself with the wrong attachment ready and then burning away some of the juice you have built up. Thus leading to the above issue or find yourself in a fight that you did not mean to even start. It is a problem that could have been solved with a different implementation or change to the cooldown system. It is going to happen often and it is going to upset you. Just be ready for all of that unless the team pushes out a change to fix this design issue.

Lastly, and this will be a mixed bag issue, it can be a little hard to backtrack in F.I.S.T. That is part of the point of a Metroidvania title. We progress, find better gear, go back to use the gear, to hopefully progress or find other gear. While we do have a map in the game and some fast travel options, it feels like these are limited a bit to force the player to make the longer trek and spend more time figuring out what to do to get there. Especially with the visuals feeling like it is a 3D game but still only moves in a 2D space. There is no issue with that, but I spent more time than I want to admit trying to figure out how to move to a new location that my map showed, tried jumping on a block that looked like it was an option, only to find out it was a decoration and something to fall right through to the main map. Not a game-breaker, but something that frustrated me more than lead me to a feeling of success once it was completed. Most of which boiled down to the style and art in the game not fully blending with the mechanics for me. Even though I did find some of the mechanics annoying in F.I.S.T: Forged In Shadow Torch, that does not mean that it does not shine as a great platformer or Metroidvania title out there. In fact, it heralds back to many of the great aspects and titles that the genre hails from and gives it to us in the best of ways. For most of the game, it was all about progressing forward, taking out the enemies, and then planning on how to get to the next location. That or remembering what was behind us and how we needed to platform back to them. This was also done well through the progression system of the game that did not hinder those looking to explore the world of F.I.S.T but keep them on the right track so they could have a chance to handle what they were about to encounter. I never found myself wandering into a location I could not survive unless my skill was just not up to par, which is the bigger thing here. This is sometimes missed in other Metroidvania titles and players can find themselves in areas they just cannot finish because the tools are not there yet. It is a balance and it is done well here.

This is all driven through various in-world items and elements in F.I.S.T. All of which have you wanting to fill out the skill tree and upgrading the various skills of the weapons. Thus leading us back into the exploration element of the game to find the hidden collectibles needed to purchase the next skill. Most of which were hidden extremely well that it felt like an accomplishment once you were able to get to them. Either that or want to beat yourself up trying to figure out the most effective way to traverse the area with what you have. Even with the missteps listed above, I never wanted to give up and just move on. I needed to get the next bit in the hopes that it would let me unlock the ability to make the action easier down the line in F.I.S.T. Sometimes it was easy and sometimes it was a nightmare. Always a good time to have and a solid pat on the back once things were installed on Rayton here. Even if I needed to take a rage break every now and then with the game.

Finally, and something I figure would be the case from the announcement of F.I.S.T: Forged In Shadow Torch, the characters and world of the game were so much fun to experience in the mix of it all. Even if you are in just for the story and character development of the game, you will not be let down at all. TiGames could have just left it all as alternate universe animals with machines hunting them to let the strange drive it forward. They do not and just elevate all of that to something you feel like you need to know more about. Even when the story starts to take some of those familiar beats we have experienced numerous times, it manages to bring a human element back into it all and suck you back in. Even if it is sometimes through the goofiness of some of the characters. It feels more like a world to live in instead of the one you are just going to be a passive player in. Much more than most games in the genre that just place things out there for the fun visuals and then figure out what they actually were there for down the line, if at all. Kudos on not doing that to us here. While all of my time with F.I.S.T: Forged In Shadow Torch was not the laxest out there, I will not say I did not enjoy myself with it all. It could have used a few little tweaks to make the UI and controls a bit more intuitive, but it was never something that made me want to give up on the game and push on through. This was a good thing as I loved Rayton, the ragtag crew he picks up along the way, and how everything shakes out for them. I have a strong feeling you will too. That is why I would place F.I.S.T in the list of games to give a go if you are into the Metroidvania genre of games. It will have you moving all about their world and exploring to your heart's content. Not to mention let you play as a rabbit with a giant metal arm mounted to its back. That by itself should be enough to get you to look at what the game has to offer up. It is a solid deviation from everything else fed to us right now in the industry.

F.I.S.T: Forged In Shadow Torch was developed by TiGames and published by BilliBill for the PS4, PS5, and PC on September 7th, 2021. A PlayStation copy of the game was provided by the publisher for reviewing purposes.