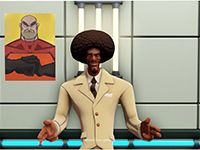 The release date for Evil Genius 2: World Domination on the consoles is set and we will see more of the Evil Genius fun in November this year

A new realm is about to be dominated with Evil Genius 2: World Domination heading to the consoles this November. We already knew that Rebellion was bringing it over to the PS4, PS5, Xbox One, and Xbox Series X|S, but had no idea on the date. That is the latest update we have for you with this one now. The Evil Genius on the inside let it slip and now we can look at November 30th for more gamers to head out there and make their own bases with the aim to take over the world. The virtual world of the video game at the very least, but it could be a weird way for some truly insane humans out there to try to plan in the same way. Doubtful, but weirder things always do happen out there…

For those that might have missed the original announcement that Evil Genius 2 is heading to the consoles, it will bring with it all of the current updates and DLC that the PC version has to offer as of now. It will be available in both a digital and physical form for those that still like to have the discs to their games here. Given how some of these things shake out, this is not a terrible way to go. Then you will be able to ensure that no matter how well the geniuses take over the world, you will have access to play your copy of Evil Genius 2. I think I may have gone a little too deep into the game's world at this point. Have a look at the announcement and get ready for the short wait we now have at hand.

Evil Genius 2 is a satirical spy-fi lair builder, where players take control of an Evil Genius and set their plans for world domination in motion. When it feels this good to be bad, the Forces of Justice don’t stand a chance!

Build your own unique evil lair and cover operation, train a force of criminal minions to defend you’re your lair from the Forces of Justice, and dominate the world with a Doomsday Device in this direct sequel to the 2004 cult classic!

Will you be taking on the world in Evil Genius 2 in November or have you been doing that for a while now on the PC? Do you think we will see more DLC added in over time or will it halt after the next group of gamers out there are locked in? Do you think we will see this hit the Switch at any point or will that be a dream we will sit back with forever? Let us all know down in the comments what you are thinking and then feel free to discuss it all if you so wish. If we have more to share for Evil Genius 2: World Domination, know that we will have it all here. Just keep your eyes open on the site and our socials for all of that and much, much more.