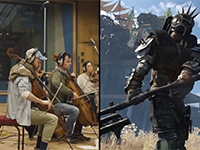 Just in case you were thinking that we did not have enough coverage on the music for Dying Light 2, here we go with one more look at how it is all being made and worked into the game in general. It is something that Techland will have flow and shift as we do in the game and it needs to be perfected to live up to the hype of it all. There needs to be a good justification to use the tools that they are also using for Dying Light 2 at the end of it all and what needed to be done during Covid times. This happens to be what they are highlighting this time in the video along with a few things we have seen before now too. With the wait for February 4th still a bit out there, we do need to have more hype for us to keep the eye on the prize.

This new documentary into the famous Abbey Road Studio where a good portion of the music for Dying Light 2 has been recorded in-person as well as remote. More on the composer side of things with most of the performers in the same space with the composer in their headphones directing. Not all that exciting, but we do get a good look at how the music will flow into the mix of gameplay for Dying Light 2 here in this video. Near the end of the video is where that comes up and it does look like it is fitting just as well as they are aiming for. Now we just need it to carry over to the full release of the game. Have a look and see for yourself as we wait for another bigger update for the game outside of the music again.

In the documentary, Techland reveals how the official soundtrack was created in sync with the game, plus the inspiration and goals that guided composer Olivier Derivière (Streets Of Rage 4, Vampyr, A Plague Tale: Innocence) while working on the soundtrack with the London Contemporary Orchestra.

Witness the music recording process in Abbey Road Studios, one of the most recognizable studios in the UK (previously used by artists such as The Beatles, Pink Floyd, and U2). Learn about Derivière’s approach to scoring video games and how his vision and music were implemented into Dying Light 2. Thanks to the collaboration between Derivière and the talented sound-level designers at Techland, players can experience an evolving soundtrack, dynamically shifting to reflect their in-game actions.

The short documentary also touches upon many production aspects of the soundtrack recording, including a non-standard recording process used in response to the global pandemic. Artists recorded individual sections of the orchestra for the first time remotely. See how the orchestra combined efforts from London, Paris, and Los Angeles to create an atmospheric, unforgettable soundtrack for Dying Light 2.

Does it matter to you how the music is recorded for Dying Light 2 here and is it going to be a bigger thing with all of the focus we have here? Will it always flow as well as we see here or will it only be in specific places in the game where it will always work correctly? Do you like how it all looks when it comes to the enemies and other beings in the game world here? Tell us what is on your mind about all of this and everything else down in the comments. There will be a lot more for Dying Light 2 and we will have it all here for you. Please keep coming back to see and hear all of that to keep the hype going for this one until it launches.