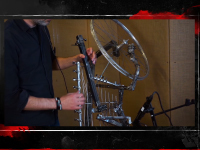 Recently, we had a look at some of the music that Dying Light 2 will have in there and how it will ebb and flow with the movement and actions in the game. It will be interesting to hear it all in motion this coming February but there is a little less of a wait for the main theme and other aspects that Techland is putting into the game. Some of which we had little hints and views of before and now we can have a look at what they are truly doing for the music in the game. Specifically, the custom instruments that we have heard and will keep hearing in Dying Light 2 at launch. All of it looking like something that could be crafted into the world of the game, which is always a great way to help out with the immersion of it all.

What we have to listen to this time is what is called the Electric Psaltery in Dying Light 2. This is the cobbled-together instrument that has a bike wheel and other scraps of metal welded onto it. It is also what the composer is using to get some of the fun scrapping sounds and other industrial melodies in the mix of the game. Something that not only takes us deeper into the action, but will also tell the story of Dying Light 2 from start to finish once we know how it all goes. That is an interesting take on the music of the game and I am curious to hear how that all goes. Have a listen to the latest we have here on this and see if you can pick up what the compose is putting down there.

Fashioned from an old bike wheel, a steel rod, several metal wires, and other refuse of the city, the Electric Psaltery evokes the scrappy ingenuity of Villedor’s survivors, as if pulled right from the game world itself. Designed by DIY instrumentalist and musician Nicolas Bras, the Electric Psaltery’s strings, which can be plucked or bowed, correspond with specific in-game characters. The “wheel of fate” that rests atop the psaltery makes a soft rattle when spun, which can be heard in-game when making major decisions that will affect the story, characters, or world.

To truly bring the ambitious Dying Light 2 soundtrack to life, Olivier Derivière and Techland collaborated with one of the world’s best orchestras, the London Contemporary Orchestra. Together in Abbey Road Studios, Olivier and the Orchestra recorded the entire soundtrack, creating a musical experience players won’t forget.

Do you enjoy when developers go this meta into the creative process or is it something that most will not even notice? Do you think we could have had the same sounds made for Dying Light 2 without this new instrument or was it truly needed to nail it perfectly? How do you think the music will fully tell the story too or is that just a fancy way to discuss the themes for the characters and how the action will flow? Tell us all of your thoughts on this down in the comments and then feel free to discuss it all. We will have more for Dying Light 2, obviously, so be sure to keep checking back for all of that and much, much more as time marches forward.