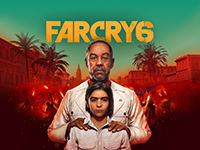 We sit down and review Far Cry 6. The next major installment into the IP with some Big Characters. Here is our review of Far Cry 6

The next title in the Far Cry line is here and ready for us to head out into a world to save the population that is being oppressed and abused. That does seem to be the main way all of these titles from Ubisoft go and flow. A little social commentary mixed with an open world of chaos and destruction. That is why we come back. It is also why we are glad to be back with our review for Far Cry 6 as it launches out there for all to go crazy with. Does it hold up and improve on the IP or is it another by-the-numbers release we did not want? You are going to have to keep reading to find out and see if it will be a title you need to have in your library now.

Welcome to Yara, a country in turmoil but also holding the supposed cure for cancer. It also happens to be one controlled by a new dictator that has obtained almost full control of the island with the claims to bring the people into a new era and power on the world scale. Things are not always what it seems and Dani Rojas is forced into the situation where they need to take up arms and topple this government. The people of Yara would also like to not live in fear and that is where our guerrilla tactics and combat will come in. There might also be some bigger explosions needed to bring about peace to the land, but that is always the way. While there were some vast improvements to the overall fun of Far Cry 6, that does not mean it was without its faults out there. One of which always seemed to come back to any form of transportation in the game and the basic locomotion. Not in terms of Dani running, even if there was no indication of a stamina bar I saw, but more in the other forms that we get forced in to. Granted, Far Cry 6 is not a driving game, but with many missions requiring us to take a vehicle, or modify one for our liking, or need to steal one for the greater good, you would think that there would be a huge effort into making it work. Between the clunky controls and lack of spatial awareness each ride give you, it was close to impossible to get a smooth ride from location to location. This goes over to even being on horseback in the game. It led me down a path where I missed out on the map as I generally opted to airdrop in instead, at least when available.

This was a bit more on the sad side to me, as Far Cry 6 also brought in a fun-sounding gameplay element with guerrilla paths. These would be something that we can use to bisect the map, hide from enemies, and various other benefits. Partially to the same degree of the above, I did not get that level of gameplay added in and, in fact, ran into more patrols than allies even when the heat was completely off of Dani. They ended up feeling more like paved "off-road" sections of the game that Ubisoft knew we would want to take anyway. There was just a gameplay element claimed to be on top of it, but I never saw it during my time with Far Cry 6. This is not a terrible thing and something others can take advantage of, but I found that as it was presented it did not deliver. Even if it was something that was used to give a little more authenticity to the world and characters involved.

The last major gripe I have with Far Cry 6 has to come down to the inventory systems and management in the game. During the game, you can pick up weapons and other pieces of gear, which is good. Each has a different gameplay element and abilities tied to them. Sadly, most of them felt like something that should have been normal character progression and not tied to something that can be removed and swapped. Sure, the hazmat suit should lower the poison damage we take, but a bit of other armor that increases overall stamina seems like something we should have on the base level. More so when it can take a long time to swap between everything. Most of the time I stayed in what worked best for me and only swapped out when the story required it because it was hard to navigate the menus for all of this. This goes for the weapons too, which had more agency in Far Cry 6 than we have seen in any of the past titles in the line. This, of course, brings me to one of the things I did find interesting and a fun bit of gameplay to have in Far Cry 6. Unlike the past titles where everyone was set into basic mook and goon roles, this one has multiple new types that aid on their side of the battlefield; like medics and engineers. Coupled with this, we had to do a bit more recon than we have in the past Far Cry titles with each having their own strengths and weaknesses beyond the basics. This would get you to try to better plan a stealth attack or a run and gun attack, for starters. It would also help you try to play what weapons and mods they needed so you could have your armor-piercing rounds for the heavies and the flamethrower to burn down the gassers and plants out there. It is a bit of a change at the start, but once you get the hang of it, it fits the setting and offers those that like to take in tactics the extra reason to do so.

While all of these new options and features for Far Cry 6 are nice, the game also improves on all of the basics we have known the IP for. That being the gunplay, stealth, and explosions in the mix of it all. No matter the way you want to play, it always feels like you are able to blend the two seamlessly and are not always forced into one or the other. Even when it comes to certain story missions, things are kept free-flowing and very tight when it comes to all of the controls. Even when you want to throw caution to the wind and just play it all as a basic FPS title, everything is responsive and feels like you are the hero of your own story. That is what many of us all go in for when it comes to games like Far Cry beyond the power fantasy and just being able to point and click some characters to death. Even though it is tried and true, you will want to keep jumping back in to clear the maps of all of the dictator's control.

Even if the gunplay and other basics of Far Cry 6 are not enough to sell you, Ubisoft does a great job of mixing in some real-world commentary while trying to stay true to the cultures it pulls from. All while giving us the usual over-the-top characters the IP is known for and a solid story you will want to keep playing through. They could have just dropped in a bunch of stereotypes and caricatures for us to interact with, and there are some in there, but time and care was taken to make sure that was not always the case. Even in this fictional world, you get a feel and sense of the characters you are helping and killing to bring you further engaged into it all. Sure, the characters with the well-known actors behind them will be solid, but even the minor roles and newer actors shine just as well. Almost to the point that it feels off that they did not highlight them all as much in the marketing of the game. Maybe that is also why they hit just as hard, though… Out of the gate, Far Cry 6 does start off feeling as a by-the-numbers release with a few tweaks to be able to call it new. All of the great features that the IP has cultivated over the years are there, also with the faults. To leave it at that place, though, would be a disservice as once the core of the game gets rolling and we have time to play with everything that Far Cry 6, it has to be one of the standout titles in the line. Mix the gameplay and all with the amazing characters and actors portraying them and it is a true force to be reckoned with. Even if you have never been a fan of the games in the line so far, this one is one that new fans can get into and fully enjoy. Old fans will completely love what the game has to offer. If you are ready for at least thirty hours of your life, if not more, to be lost into an amazing experience, then you should give this one a play. It is completely on my recommendation list, so take that as you will based on your own tastes.

I give Far Cry 6 6 Supremos on the Supremo scale.

Far Cry 6 was developed and published by Ubisoft for the PS4, PS5, Xbox One, Xbox Series X, and PC on October 7th, 2021. A PS5 copy of the game was provided by the publisher for reviewing purposes.