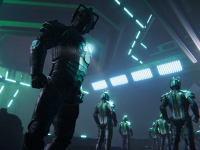 New gameplay for Doctor Who: The Edge Of Reality is here to give us all a bit more of the Doctor Who fun coming very soon

Here we go with some real gameplay for the upcoming Doctor Who: The Edge Of Reality hitting the PS4, PS5, Xbox One, Xbox Series X, Switch, and PC on October 14th. Not too far out there for this and we are just now getting some real gameplay from Maze Theory to look at and get hyped up about. Especially after having the fun of the VR version of their Doctor Who line entice us all in and this being the follow up. Even if it is a little odd to offer up the game to those that did not have a chance to experience what came before it all. VR is still a growing beast and I can see some feeling left out if they are only Switch gamers or PC gamers that have not thrown in for that extra cost of entry before. That is a completely different topic, though, and now we can see what we all will have here in short order.

The unfortunate thing here for Doctor Who: The Edge Of Reality is that this gameplay looks like a mix of dated and interesting to experience. Some of it looks like it was some of the limitations that the VR offered up before with the basic animations and visuals we will experience in the game. Then you have some of the horror elements, like Weeping Angels, that could be obfuscating some of that with a darker tone and element into the game. Granted, this all still feels very Doctor Who given the source material and evolution into the modern times. My hope is that it will get us further into the role of it all that we will forgive the shoddy visuals and effects in the game. Kind of like the show has done for decades now. Have a look and see it all for yourself, though.

Doctor Who: The Edge Of Reality — Gameplay

Doctor Who: The Edge Of Reality features new environments, a new threat, and plenty of Easter eggs for fans to discover. Naturally, players will also face classic Doctor Who enemies such as the Daleks, Cybermen, and even the Weeping Angels. It'll also star familiar characters, including the Tenth Doctor, voiced by David Tennant, and the Thirteenth Doctor, voiced by Jodie Whittaker.

Doctor Who: The Edge Of Reality releases on PC, PlayStation 5, Xbox Series X/S, PlayStation 4, Xbox One, and Nintendo Switch on October 14, 2021.

Does this all look a bit dated to you too or is this a slight nod to the Doctor Who style many have come to love over the years? Does it look and feel as if some aspects were used in the VR setting and then just ported over on the lesser hardware? Are you glad to have some of the doctors back in here to help voice things or will that just be a selling point for the hardcore fans that will eat up anything the IP has to offer? Let us all know down in the comments and then feel free to discuss it all if you so wish to. We will share what we can for Doctor Who: The Edge Of Reality, if there is more, so please keep checking back for all of that and much, much more.