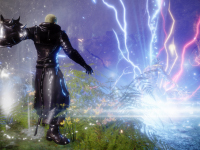 The release date for Stranger Of Paradise: Final Fantasy Origin is now set down with this Final Fantasy title getting another demo too

Back when Stranger Of Paradise: Final Fantasy Origin was first shown to the world, there was a lot of questions and concern as to what it was going to offer up. It was looking as if Team NINJA was offered up the reigns to do what they wanted to and Square Enix was letting them go down a darker path for it all. A nice little break from some of what we have had for the Final Fantasy titles before. It also looked as if it was going to be a title we were going to have to wait quite a while to see hit the PS4, PS5, Xbox One, Xbox Series X, and PC. Today, I am glad to say that the wait for Stranger Of Paradise is not going to be too long out as we have a March 18th release date laid down for the game to hit us all. In physical and digital forms too.

Now that we have a final date for Stranger Of Paradise: Final Fantasy Origin, what else do we have to look forward to for all of this until then. Well, for starters, we do have a new trailer that does show off some new gameplay for it all and how it could link into the grander Final Fantasy IP. Then again, what good is looking at new footage when you have the chance to actually play it? Yes, there is another timed demo out there as of right now and until October 11th that will let us dig deeper into what we had before. For those that missed out, it sounds like you will have your chance with all of that too and this new bit. All Square Enix is going to ask is that you offer up some feedback at the end. They are letting you play with the multiplayer aspect in all of this, so that would be the nice thing to do after all.

Pre-order the Digital Deluxe version to receive a Digital Artbook, Digital mini Soundtrack, Season Pass, and all the additional bonuses.

Jack and his comrades must hazard numerous challenges to bring the light of the crystals back to Cornelia, a kingdom conquered by darkness. Will restoring the crystals’ light usher in peace or a new form of darkness? … Or perhaps something else entirely?

Step into a world of dark fantasy and revel in the exhilarating, action-packed battles!

Did you expect to see another Final Fantasy title in this form out there so soon or did you think we were years away right now? How well do you think the multiplayer will work for all of this and will it be something that is forced moving forward in this traditionally single-player IP? Have you been ready to experience this since it was first announced or will it take the demos to get you full in on the idea behind all of it? Give us all of that feedback down in the comments and then feel free to discuss it all. We will share all that we can for Stranger Of Paradise: Final Fantasy Origin, so please keep an eye on the site for all of it. My guess is that we will have much more soon, as we round out this latest demo wave.