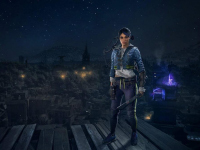 Here we go with the next major update for Dying Light 2 here from Techland to take us all further into the undead world once more. This one being the exploration aspect of the game and world for us to enjoy and how we will be able to modify things just be existing in the world. That and making all of our choices in the game that will have the missions and other aspects reacting as they should. Nothing new to the Dying Light IP, but something that the team has made sure to further along here to make things drastic. Like the fact that we can lose full NPCs in the game if we choose to make a school instead of a warehouse. As an example here at least. From what we have had before, things can go even further out there.

In addition to all of these fun things to explore in Dying Light 2 when it comes to the environment, it looks like we will have more characters in the mix to enjoy too. In this instance, we have Rosario Dawson picking up the role of a character named Lawan. A character that will be able to be changed along the way with those choices we will have in Dying Light 2. To the point that Lawan can be overly helpful or another antagonist to hinder all of our progress in the mix. Almost like some of the characters that we have seen from the actor in the past. It will all lead into more of the dynamic nature of the game as we head on through and survive the nights moving forward.

Don't miss the fourth episode of Dying 2 Know! We'll tell you more about the vast open world of Dying Light 2, reveal the person behind Lawan, and show you how the soundtrack for our game was created!

Learn what she has to say about her character!

Speaking of all of that being dynamic, we have a new listen for Dying Light 2 in terms of the main theme and how some of the music will flow in the game too. It will be AI driven as we hit different points in our runs and combat. This will lead to an interesting soundtrack to the action as it will shift constantly and sound like it will only stick with the same music for a while if we stay still. You can hear the main theme for Dying Light 2 just below and see how it will be mixed based on some of the above actions. It is something that could lead to some fun advancements in the industry to make sure we always have a fitting soundtrack in all of our video games moving forward.

Internationally acclaimed for his distinctive and dynamic soundtracks, BAFTA-nominated French composer and music designer Olivier Derivière (A Plague Tale: Innocence, Remember Me, Alone In The Dark) scores his most ambitious soundtrack yet in Dying Light 2.

Did you expect anything less for Dying Light here or does this feel as they have just advanced the design for it all during all of this downtime? Do you like the idea that the soundtrack will change as you run, fight, and jump? How do you feel about the addition of Rosario Dawson into the game here and will it work out as well as the team is hoping for? Tell us all of those thoughts down in the comments and then feel free to discuss it all if you so wish. We will share more for Dying Light 2 as we have it all, so be sure to keep an eye on the site for all of that. We know there will be a load more to enjoy beyond just these Dying 2 Know videos.