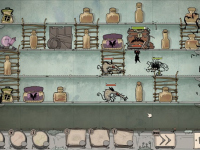 The mobile game, JARS, will be branching out to other platforms with JARS coming to the PC and Switch soon

If you have been waiting for a mobile title to make its way over to the PC and Switch, your day has come with JARS getting a launch there. At least a launch for it when October 20th rolls around with that being the announced date for it. I have a feeling that will be a solid date for it all for JARS and not seeing any delays given how it is, but I have seen other oddness out there. There is no word on if the other platforms we game on will have the chance to join in, but it makes sense for these ones as of now given how mobile they can be. Even if there is a wait for the true mobile PC hardware to drop on us all in the future still.

Those that have no idea about JARS, it is a strategy title that will have us employing all sort of minions in the world to hinder the nasty crawlies trying to get into your cellar. We need to keep everything safe and secure from the rats and mice out there trying to smash things and get into the Sarcophagus that happens to be down there too. All while enjoying the hand-drawn style of JARS that comes from some fairly obvious inspirations in the mix. Have a look at some of the gameplay below and then wait for October 20th if you do not want to be forced to play it on your mobile devices still.

In the musty depths of his parent’s basement, young Victor tries to discover the secrets buried beneath his house. Why are there pages missing from this mysterious book and whatever is Dracula doing down there? On his bizarre adventure, Victor will come face to face with nasty creatures, hiding in the shadows, and will have to keep them away from the Sarcophagus.

JARS is a strategy game with puzzles and tower defense elements. In order to reach their goal, players will have to break the jars littering the cellar. What waits inside of them is always different, making the reveals exciting and forcing the players to adapt to ever-changing levels. The grim yet endearing, hand-drawn art style gives JARS a distinct look and is inspired by the animated movies of Tim Burton and Studio Laika.

To defend each level's Sarcophagus, the players must deploy minions and items like mosquitos, acorns, and hedgehogs to destroy every jar and defeat the nasties crawling through the cellar. Finding the perfect strategy by choosing the right minions at the right time, and combining them with items and other upgrades, is essential to ensuring Victor’s victory.

A free demo of JARS will be available during the Steam Next Fest from October 1-7. JARS is developed by Mousetrap Games and published by Daedalic Entertainment and will be released on October 20th for PC and Nintendo Switch.

Is JARS a title you were expecting to see hit the PC and console here? Will there be a benefit to having the other power out there for this one? Will you want to save the dweller in your basement for all of this with these creepy crawlies? Tell us your thoughts on it all just down in the comments here. I will share more for JARS if there is anything to offer up. Just keep close to the site for all of that and everything else the team will have here in the coming days.