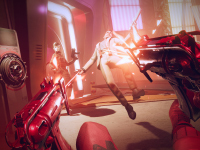 The time is finally here for us to jump into the loop that is Deathloop. The game has hit the PS5 and PC and we get to see if what Arkane Lyon has done will live up to all of the hype out there. Especially with how it all shakes out after the parent company went after the game was set down as a PS5 console exclusive. It is something I personally find funny, but I digress and need to get back to the topic at hand. Deathloop has launched and we have a few more things to entice those that have been holding out from getting into the mix of it all. Mostly with those wondering if there was going to be a solid story in the mix of it all beyond just the killers out there trying to do what they do best.

It looks like the story goes a bit different from what we might have known for Deathloop before now. Instead of it just being a bunch of evil masterminds out there, it sounds like it could have been a batch of brilliant minds that were gathered up for other reasons and they just seem to be shifting into the new roles of it all. More so as it sounds like the whole game of Deathloop sounds like it will be our character just trying something new to get out of it all. Kind of like what we had happen in Groundhog Day, just with more guns and blood. The way good games should always be here…unless we have played all of this out already…

Deathloop — Down The Rabbit Hole

Blackreef is a mystery, and Colt is looking for answers. Who are the Visionaries? What is Blackreef? How does the timeloop work? Why does everyone on the island have amnesia? Why is Julianna always lurking behind the nearest corner ready to ambush Colt? Most importantly, Colt wants to know: “Who am I?”

The deeper Colt goes down the rabbit hole, the more questions arise. One thing is for sure, Colt is determined to get to the bottom of this mystery and break the timeloop—no matter what answers he finds.

"This whole island's like a broken record, skipping endlessly on one fulfilling day". Welcome to the island of Blackreef, where the fun never stops and every day is a celebration of debauchery and chaos… unless you’re Colt, a prisoner in this time loop who is being hunted by every person on the island.

You have 24 hours, 8 targets, and 1 rival assassin hunting you down… Do whatever it takes to break the time loop.

If At First You Don’t Succeed… Die, Die Again.

Are you already in on the loop for Deathloop or did you need those new reminders here to get the mental juices flowing? Do you find the story of it all here a bit different than we had given to us before or is it shaping up as expected? Do you suspect that we will be playing the bad guy in all of this or will we just be a dark hero still? Let us all know down in the comments and then feel free to discuss it all. If we have more to share for Deathloop, it will be on the site for all of you as quickly as possible. It feels like we have stated this multiple times already…