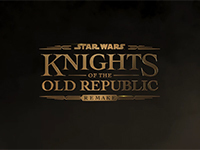 Another classic Star Wars title, Star Wars: Knights Of The Old Republic, is getting a remake and will be exclusively coming to the PS5 for consoles

The headline here says most of it, we are getting a Star Wars: Knights Of The Old Republic Remake to add into our list of titles for the PS5 and PC. An interesting call given the twenty-year past of the IP, but it is the deal that is going down between Aspyr Media and all of the other powers that be for it. Given the close deals that Sony has with those currently behind the Star Wars IP, it is not a shock, but it will only be a PS5 exclusive for the console side of it all and only at launch. That could mean that the Xbox Series X could see this title hop on over there at some point or it could just be in reference to that it will be coming to the PC too. We will have to wait and see about that. We just get to know that it is coming and we should be excited about it.

In addition to this announcement, we have a cinematic trailer for the Star Wars: Knights Of The Old Republic Remake to take in that does not offer up much else beyond the above. We do know that the game will be remade from the ground up but still keep a good portion of what we loved about the original in there. All of this is to leverage the long-running love of it all and give those Star Wars fans a version of the game that is running on the latest hardware. That will be on both sides of the release with the PC version being the same build and not just a remaster that fans will pay for. That is at least a bit of the good news when it comes to all of this and those upset that they may have to jump consoles to experience the latest and greatest for this title.

The classic Star Wars RPG, Knights Of The Old Republic is getting a remake for the PS5 and PC from Aspyr Media.

Are you shocked to find out that this Star Wars game is getting a full remake or did you expect it to be about time as we have seen with other IPs out there? Do you think it will be a timed exclusive to please fans that have been playing the game still on the Xbox family? What do you think will be scrapped out of this build or added in now that they have more power to do so? Let the universe know what is on your mind down in the comments and then feel free to discuss it all. When we have more to share for the Star Wars: Knights Of The Old Republic Remake, know we will have it all here. Keep an eye on the site and our socials to be able to keep as up-to-date on it all as possible.