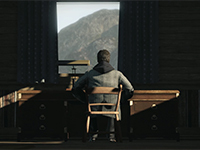 There were some rumors, teases, and now the full announcement that we are getting a Alan Wake Remastered version to it all. This time not from Microsoft, but from Epic Games Publishing and Remedy Entertainment instead. Do you know what this means? It means that those on the PS4 and PS5 will also be able to get in on the Alan Wake fun in addition to the Xbox One, Xbox Series X, and PC when it drops. When it drops will also be this coming October 5th for those that think we will have to wait a while or just want something fun to play over the month of Halloween. This is one of the few horror titles that sucked me into my Xbox systems for so long and I am amped to go through it all one more time after everything the studio has offered up to us so far.

In addition to the new platforms being available for Alan Wake here, we are getting the game again in the full 4K with 60fps to enjoy. Just as we should have assumed to be here for it all. I am guessing that we will also be seeing the textures and models getting a bit of an upgrade to it all too, even if the video here does not truly highlight it all. I am also guessing that we will have some DualSense additions for the PS5 version of this given that this was all made official during the recent PlayStation Showcase. We can state that there will be one interesting change here for the Alan Wake Remastered version, and that is that the product placement that was in the game will be scrubbed out and replaced with something a bit more generic. This is most likely due to the fact that the publishers have changed and deals were not even talked about renewing given how it was received before.

Play as troubled author Alan Wake, who goes on a desperate search for his missing photographer wife, Alice. The sleepy Pacific Northwestern town of Bright Falls isn't what it seems. A malevolent presence lurks in the dark, and a horror story Alan doesn't remember writing is coming true.

Did you ever think that we would be seeing Alan Wake on the PlayStation systems or was this the great surprise you needed here? Could this lead to the other IPs that Remedy has created also getting the jump to the other systems? Could we see some new in-universe ads pop up in the place of the other ones or will it just be damaged and blank billboards in the mix of things again? Let us have all of those thoughts and ideas down in the comments and then feel free to discuss it all. If there is more to share for the Alan Wake Remastered version, we will share it all here. Please keep checking back for all of that and much, much more.