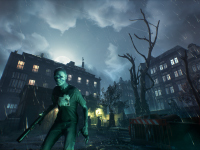 Vampire: The Masquerade — Bloodhunt is now heading to the PS5 for more players to join in on the Bloodhunt out there

It looks as if the hunt will be spilling out more for Vampire: The Masquerade — Bloodhunt, as it looks like the game will be heading to the PS5 at some point this year. That is at least the hope from Sharkmob after getting the game out there on the PC to some great response. I am sure this is why they held off until the latest PlayStation Showcase to slip things in there. Not only slip it in there, but also give many out there that have not had a chance to experience Bloodhunt a little more to go on. It is a free-to-play Battle Royale game that will have us in the roles of the blood-sucking creatures of the night. There is more to it all, but that is the basics for those not fully up on their World Of Darkness knowledge.

There is no date on when this version of Bloodhunt will be out there, but it is slated for 2021. I would venture a guess that we could see something in October if you cannot find yourself getting to a PC that can run it. There does also happen to be quite a few videos out there that are showing off the three clans and their variations as they jump into the mix of the night. You can get a little taste of that below to see how Bloodhunt looks as of now and get an idea if you are going to be heading down the path of the Nosferatu, Brujah, or Toreador in the matches. Maybe, we will see more clans and powers added in over time if this new branch gets more to pay for the little things that gamers are always looking for in these kinds of titles.

Join the Bloodhunt and become the ultimate vampire! Bloodhunt is a free battle royale game set in the Vampire: The Masquerade universe. A treacherous betrayal has stirred a war amongst the vampires, who are also being targeted for annihilation by a secret society known as the Entity. Use your supernatural powers, weapons, and wits in this thrilling battle royale game to dominate the night and restore the Masquerade.

Did you think that Bloodhunt was going to be a PC exclusive forever or was it just a matter of time before the consoles saw it? Do you think we will see it land on the Xbox Series X and Switch at some point or will this be as far as it goes? What clan would you like to see added into the hunt here over time and could we see the full roster if the game performs well? Let us all know down in the comments and then feel free to discuss it if you so wish. When we have more to share for Vampire: The Masquerade — Bloodhunt, it will be up on the site for you. Just keep a close eye out there for all of that and much more in the coming days, weeks, and months.