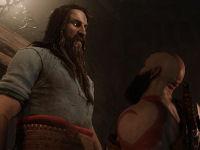 It is finally here, and we have our first real look at God Of War: Ragnarök now that is officially named that and since we were told that the wait for the game to hit the PS4 and PS5 was pushed until 2022. That is not that far off anymore, which is why I am sure that Santa Monica Studio chose to give us the first gameplay here. The first gameplay but so much more for this God Of War that brings us some questions as well as some answers. That and our first looks at a few of the Asgardians we will be facing off with in the game as we bring in Ragnarök. It seems like this one will only be a two story cycle instead of the three until we kill all of the gods again and maybe pass the torch once more. The level of excitement is off the charts over here now.

There are a whole lot of things coming back from the last God Of War we had to experience but with a few new things mixed in. Well, obviously that was going to be the thing besides the story, which looks like it will be picking up shortly after the previous game with Freya looking like she is out for extra blood. All while showing off the new dog sled that Kratos and Atreus will be using when the lake is frozen during the game. It looks like it might not be the case through the whole game with there being a few scenes from the canoe from the last God Of War making a showing again. All so we can get around this world and see so many of the new creatures, characters, and beasts we will be dealing with as Kratos clings closer to being a father instead of giving in to his inner demons.

Speaking of new characters, God Of War: Ragnarök will be giving us many new gods and others to interact with. Some names that we had tossed to us and can see and hear here are Odin, Thor, Týr, Angrboða, and Durlin. The one to pay attention to at the end being Angrboða as they are one of the other last Giants out there and traditionally the mate of Loki. You know, one of those characters that will be needed to bring in Ragnarök if they are sticking close to the stories we have in the real world. All of which with a solid voice cast bringing them all to life once again in God Of War: Ragnarök. Have a look and see the small teases we have mixed in here to get us hyped up to wait until the pre-orders kick-off. I know my body is ready for all of this.

From Santa Monica Studio comes the sequel to the critically acclaimed God Of War (2018).

Along the way they will explore stunning, mythical landscapes, gather allies from across the realms, and face fearsome enemies in the form of Norse gods and monsters. As the threat of Ragnarök grows ever closer, Kratos and Atreus find themselves choosing between the safety of their family and the safety of the realms…

Did you expect to see things flow out there like this for God Of War: Ragnarök or did you expect there to be a long wait? Do you think all of this will be from earlier in the game and the team will strip Kratos and Atreus back down as it has happened in every other title? What other gods do you think we will have to fight in this one and will we see a time jump happen to explain how the mother of monsters helps bring in Ragnarök? Let us all know what you are thinking down in the comments and then feel free to discuss it all. We will share all that we can for God Of War: Ragnarök, so be sure to keep a close eye on it all moving forward. The hype is truly real for us over here.