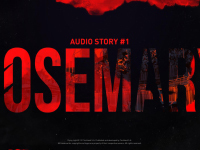 Recently, we had a whole lot of gameplay and showings for the mechanics for Dying Light 2. Sure, there were tidbits of story and other world-building elements in there, but Techland has been a bit coyer when it comes to all of that since the last big story trailer. My guess is that is to keep the core of Dying Light 2 a bit hidden until the game launches on December 7th. It could also be that they want to build out the world around it all that gets lost in the subtlety of the storytelling. That is why we get fun things like this latest Audio Story for the game to take in. Something that looks like it could be the first of many that we could have leading up to the launch and then maybe further into the game too.

Get ready to have a nice little story told to you now within the world of Dying Light that may or may not build into something bigger for this sequel. A story that takes us down the path of Rosemary who was a young woman in this world that went missing and has weighed on the other survivors our Pilgrim has stumbled upon. It seems about right for the world of Dying Light and could lead to something more in the upcoming game. It could also just be a fun way to keep us engaged as the other forms of media for the game have been doing up to now. It is interesting to see how much of the world the team is building here for the game and I have a feeling it could all build into one massive story that draws in so many others. Have a listen now and see if there is more to it all than we suspect.

Follow the steps of a tired Pilgrim looking for a shelter. As he stumbles upon an old church, he discovers a story of Rosemary — a young girl who's disappeared a long time ago and has been haunting the survivors ever since.

Are you enjoying all of the side items that are dropping out there for Dying Light or would you rather experience it all in a video game format? Do you think this will play a larger role in the game's narrative or is this the team build a world slowly instead of just hoping we explore it all at launch? Would you like to see a fully expanded world with many different stories we do not get to play with in video game form? Give us all of those thoughts and feelings down in the comments and then feel free to discuss it all if you so wish to. We will keep the news and updates for Dying Light 2 flowing out there for you as best we can. Just be sure to keep an eye out for all of that and much more in the near future.