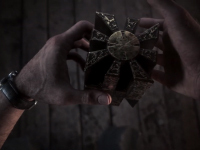 The puzzle box has been solved and Pinhead is out there roaming the world of Dead By Daylight now. Yes, the next killer is in the mix after getting all of the teases from Behaviour before now. The update is now here after all of that and the Cenobites are ready to bring the pain to everyone out there. Fans of Dead By Daylight will already be playing with the character now and the rest of us now get the update to pick up the DLC. No matter the platform you are looking at, Pinhead is here and the chains are rattling. Even if it is a bit weird to see that, we just have a killer now and not any of the survivor-type characters from the IP once more.

Yes, this is just the killer added in for Dead By Daylight, which is kind of fitting for the IP that is getting mixed in. Most of the "heroes" of Hellraiser are not true survivors and just living through the horror of it all. It would be interesting to see the game shift us all over into the trippy world that the Cenobites are from more than we have seen so far in the teases for Dead By Daylight here. Although that would vastly change some of the design of the game and make it not too easy to keep all on the same page when it comes to having the game. Unless those are all things that will be coming down the line, but that does not feel like a thing that will happen.

One of horror’s most twisted killers has arrived in the Fog. And he brought his own hooks.

Demon to some, angel to others, the new Killer is Pinhead: leader of an extra-dimensional group of beings known as the Cenobites. Devoted to exploring the furthest regions of experience through the limitless thrill of pleasure and pain, Pinhead uses hooks and chains to attack his victims, tearing their flesh, and souls, apart in the process. When the puzzle box is known as the Lament Configuration – a key to Pinhead’s dimension – was discovered and opened in The Entity’s Realm, he arrived, ready to bestow sweet suffering upon any who crossed his path.

The Hellraiser Chapter is available now in Dead By Daylight. Buy it to unlock the exclusive Lament Configuration charm.

Are you already in on this update for Dead By Daylight or did you miss the update before now? Do you think that we will see any of the other characters from the IP make their way in or will it just be Pinhead for now? Who do you think will be the next killer or IP to get mixed into it all? Give us all of those thoughts down in the comments and then feel free to discuss it all. If we have more to share for Dead By Daylight, we will certainly add it all to the site for you all. Just keep your eyes peeled to see all of that and much more.