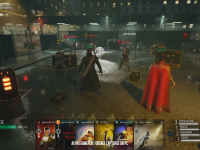 The first real look at the gameplay for Marvel’s Midnight Suns is here and we get to see how the Midnight Suns will fight, interact, and grow

We had it teased and announced, and now we are back with our first full look at the gameplay we are going to experience in Marvel’s Midnight Suns. Sure, Firaxis Games did give us a little bit to take in last week after the massive surprise announcement, but here we are with the bigger showing of what we can expect. That and a better explanation than just assuming that we will be playing a weird game of cards with the Midnight Suns here. We still will be, but there is much more going on in this tactical RPG than expected. Now we have the team and a few from 2K Games offering it all up while showing off how other members join the crew and set out to fight some of the other villains we will have to deal with along the way. Very exciting times for us all here.

We have the first-ever stream for Marvel’s Midnight Suns, just below for you to take in and it offers up a look at how The Hunter and Wolverine will be teaming up to bring down Sabertooth before he gets overpowered by other forces. That and a look at how each of our three-character team will have four random cards to use in the fights to help dictate their attacks and abilities out there. Something that is still a little vague when you look at it, but slowly seems to make sense as the fights rage on. We will be able to use the various cards to build up Heroism, which will give the Midnight Suns a bit of a boost, and then use the environment to our advantage as we deal out damage. It looks like the cards are just a stand-in for a randomized menu system that will have us selecting our fighter and what they will then pull off.

Combat aside, we also have a few new looks at how we will be able to customize The Hunter and how the dialog options in Marvel’s Midnight Suns will play into the larger scale of the game. Between missions, we will get to hang out in our own customizable base of operations. The various other characters will be there as well. This is also where we will be able to forge new cards and abilities, level up things, and then hang out with the various others of the Midnight Suns. This will in turn build up relationships and offer up access to other special abilities and cards depending on the options and paths we go down. We get to see it just a bit here, but the finer details look to be hidden for a later video to keep us going until March of 2022.

It's time for the ferocious grudge match! The Hunter and Wolverine are teaming up against Sabretooth in our first-ever gameplay stream of Marvel’s Midnight Suns.

In one corner, we've got the Hunter and Wolverine fighting to save the world. Wolverine’s razor-sharp claws, regenerating health, and ability to taunt enemies into focusing on him make him well-suited to fighting on the front line. Tilting the odds in Wolverine’s favor on this occasion will be members of the Firaxis development team and the Hunter, Marvel’s Midnight Suns’ protagonist and the first customizable original hero in the Marvel Universe. The Hunter has a previous lifetime of training and experience to draw on and can fill a number of different combat roles by focusing on dealing damage, supporting allies, controlling enemies, mitigating incoming damage, or any combination thereof.

In the other corner is Wolverine’s age-old nemesis Sabretooth, another mutant with a superpowered healing factor and the animalistic instincts and strength of a fearsome predator. Even in a two-on-one battle, Sabretooth should prove to be a fierce opponent.

Who will stand victorious?

Now that you have had the larger information dump for Marvel’s Midnight Suns, let us take in the short and condensed version of it all. Those looking for that can take a look below and see more of the same listed above but in a shorter burst. The bigger difference being that we also have a few looks at some of the locations we will be going to in Marvel’s Midnight Suns when it lands and just how vast of a world the teams are trying to give us here. It looks like we are going to have more than just five different maps to go on here and this is the best news I have seen for the game since it first was announced. Now just to see that roster filled out with the playable characters and not just some of the background ones too.

Master a battle system that rewards clever thinking with Super Hero flair, across iconic Marvel locations in an epic tactical RPG set in the darker side of the Marvel universe. This is Marvel’s Midnight Suns. And this is a deep dive into our gameplay experience.

After centuries of sleep, Lilith, Mother of Demons, has been revived by Hydra through a twist of dark magic and science. Lilith stops at nothing to complete an ancient prophecy and brings back her evil master, Chthon. Pushed to the brink, the Avengers desperately look to fight fire with hellfire and enlist the help of the Midnight Suns — Nico Minoru, Blade, Magik, and Ghost Rider — young heroes with powers deeply rooted in the supernatural, formed to prevent the very prophecy Lilith aims to fulfill. Together, they resurrect an ancient warrior — the Hunter, Lilith’s forsaken child and the only hero known to have ever defeated her. In the face of fallen allies and the fate of the world at stake, it will be up to you to rise up against the darkness!

Did you expect to see the gameplay function like this or were you hoping to see the cards dealt this way for Marvel’s Midnight Suns? Can we expect to see these cards fully change and offer up new abilities along the way or will they still only be number changes as we boost them up? What other characters do you think we will get to play with or face off against in the final version of it all? Let us all know down in the comments and then feel free to discuss it all. If we have more for Marvel’s Midnight Suns, know we will share it all as fast as we can. Just be sure to keep checking back on all of that and much more as time marches on.