We Have Our First Semi-Look At How Things Have Progressed For The Dead Space Remake
by David 'Hades' Becker [ Wednesday, 8th of September 2021 - 05:00 PM ] 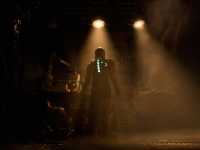 We have been teased with a new Dead Space Remake and we had a very short teaser to get us all amped up for it. Then we sat back and let one of the bigger cons happen and then wait until Motive Studios chose to go live and show us more for the game. That is, show us a very, very early stage of this version of Dead Space and how it is all looking for now. That and a bunch of different ways that the team will be altering things to keep things fresh but still the same. Even with, if you want to call it, some gameplay to take in and see what they think we all have been looking for and waiting for in the game. I do have to say they are looking to nail it so far with all that we have to look at in the mix as of now.

Try not to get too excited here, as it is very limited on any real gameplay but it does show how things have been fully upgraded from the original Dead Space to now. A vast upgrade from what we all remember when it comes to the visuals, which is not a huge surprise here. What is interesting to see is that the dismemberment system will be getting some upgrades to make the necromorphs a bit more terrifying along the way. Things like being able to strip away flesh and even leave some limbs dangling instead of cutting them clean. The mechanics that made Dead Space popular will still be there, but it will look and function more on the realistic side of it all. These are just the slashers we get to see and I can only guess as to how far the others will go.

On top of all of this, we also have the announcement that the original voice of Isaac will be back in the Dead Space Remake here too. It would have been a little odd if they did not have them back for it all. Thankfully, it looks like that will be the case for the portions that have Isaac talking but will mix in a bit more to the dialog and have him talk in similar situations that most humans will also talk to themselves as a soothing technique. It will add to the immersion just a bit more for Dead Space I think, but there is such a history to live up to and we need to remember that before passing judgment. Especially since we are still in the extremely early stages for all of this as of now.

Do you have so many big memories for Dead Space and are shocked to see how things truly looked back in the day? Do you like the new systems that we will see for the dismemberments or will that feel a bit too intense for us all? Do you like seeing that the Zero-G portions will be a bit more flowing than the original title or did you want that back here again? Give us all of those thoughts down in the comments and then feel free to discuss it all if you so wish. There will be a whole lot more for the Dead Space Remake, and we will have it all here for you. Just be sure to keep an eye out for all of this and much, much more.