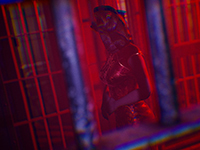 DYING: 1983 shows off more of the gameplay and the puzzles we will need to solve in DYING: 1983 when it comes for us

The escape rooms will be hitting us hard and fast with DYING: 1983 when it lands on us, and now we have a bit of new gameplay to look at to see just how we will need to go about the game's world. Not only that world but also how we will solve all of the problems and puzzles that NEKCOM is crafting for us all. Not is a way to spoil it before DYING: 1983 hits the PS5 in 2022, but in a way to give us some thoughts on how these escape rooms will digitally flow and feel for us all. We also get a look at some of the other weirdness that we will have to encounter and overcome in the game too. I am looking at you, fishhead lady. Those were words I thought I would never have to type again.

When it comes to the puzzles in DYING: 1983, it looks like we will have quite a bit of the normal stuff from combinations, sliders, and item collection in the mix. All while being hunted down by the others, so there is that. The end part of the trailer does offer up a different type of puzzle that could lead to our deaths in the game. The giant teapot which shrinks when shot. If that is a puzzle and we are just not being trolled in DYING here. The title does rather allude to the idea that this could be the case and we could be in for it in the long run. Have a look and see how all of these rooms and escapes could be going down when the game does land on us all.

NEKCOM and 2PGames recently announced the upcoming release of DYING: 1983, a new first-person horror adventure that will come to PlayStation 5 in 2022 as a timed exclusive title. In this nightmarish escape room video game, players will explore a series of rooms in a surreal world to solve the mystery behind its puzzles. Similarly to the previous chapter of this franchise, DYING: Reborn, a mysterious fish-headed creature, and more horrible monsters will follow your steps to dissuade you.

DYING: 1983 is the second game in the DYING franchise, a first-person horror game series with puzzle solving and exploration elements. In this chapter, players will follow a shady physician who is contacted by a mysterious organization to participate in a secret investigation. After reaching the research facility designated for their meeting, the doctor will realize that something weird is happening there…

Were you expecting to see something a bit more difficult for DYING here or will these be the basic puzzles to solve? Could we have to do all of these with a fast and hidden timer or will some just trigger when we do one false move? How do you think all of the other horrors will mix into all of this and will we be hunted during the game too? Let us all know what you are thinking down in the comments and then feel free to discuss it all if you so wish. We will offer up more for DYING: 1983 as we get it all. We still have more to unlock and the release is still a bit out, so I have a feeling we will see a whole lot more for this game in the near future.