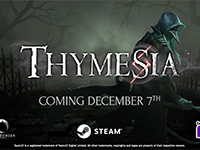 Thymesia is an sction role-playing title for the PC coming from OverBorder Studio and Team17 on December 7th, 2021.

This December 7th take on the mantle of Corvus and delve into a world of plague and ruin.