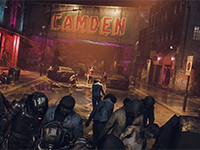 The dead will soon be roaming the streets of London in Watch Dogs: Legion over on the consoles, as we now have word that this new mode will be jumping over there for all to enjoy and for free. This would be the zombie mode that Ubisoft has had out there on the PC in the various testing forms before now. Now we just have word, and not all that surprising, that the console gamers will be seeing it. Just another way to keep expanding the world of Watch Dogs and keep us all engaged a bit longer as the rest of the DLC and expansions come out there. We just get to do it with three friends and enjoy all of the normal horror modes that many other IPs toss out there. This one just adds in all of the fun that the hacking aspect offered up to us all.

In this mode, we will be able to move about the entire map of Watch Dogs: Legion to extract and secure locations out there for other survivors. This will get us back some ammo and resources into the mix of it all. All while using the traversal and locomotion modes that we have in the core game too. I am a bit at a loss as to how we cannot just call in some worker drones and fly over everything as we could before. Maybe there is something in here to limit access to all of that in Watch Dogs since I last played, but that was my normal go-to in the missions to make life easier and then use the spider bot to do the heavy lifting. Maybe this mode will have me trying a new way about it all.

Legion Of The Dead is coming on Consoles! Team up with up to three friends and get out of a Zombie-infested London.

Were you concerned that the console version of Watch Dogs: Legion would not get this mode or was this an announcement that was coming no matter what? Do you think there will be some other limitations to the mode now to keep us out of the air only or will that be how we get it all done anyways? Would it have been cooler to see werewolves in the game instead or will zombies always be what the developers go to for their extra horror out there? Tell us what you think down in the comments and then feel free to discuss it all. If we have more to share for Watch Dogs: Legion, know we will have it all here. Just keep an eye out there for that to sneak out just as it always seems to do.