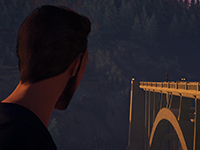 Many out there should already know the core story and concepts behind Vertigo out there. It has been a story that has been out there for almost sixty years now with the famous Alfred Hitchcock version to given everyone the visual representation of the original tale. If not, then you might be in for a different kind of ride from Microids when their published title Alfred Hitchcock — Vertigo lands on the PC this December 16th. It is still hitting the various consoles in 2022, before you start to worry. That gives you some time to watch the original film or read the original story. That or you can just sit back and see what will be coming in this iteration with the latest story trailer we have that also features some in-game visuals to show off how it is all going to look when it lands.

The story goes here for Vertigo, that we will be taking on the role of Ed Miller after he suffers a horrible car crash where he walks away without a scratch. Unless you consider the mental trauma of him believing he lost his wife and daughter in the crash. Even though, and here comes the twist, no one else was found in the wreck. Now he questions his sanity and is getting some help with it all, also while suffering from bouts of vertigo from it all. With the help of his doctor, Ed will relive all forms of trauma to try to get past and remedy it all but will also be unlocking a few things that could shine more of the horrible truth into the light. An interesting deviation from things for sure. So maybe it will be worth it to keep up on all of this and forget what we think we already know out there…

In addition to this trailer, Alfred Hitchcock — Vertigo is now up for pre-order for the PC version of it all. Doing so will score you a few cat avatars to use in your daily life. That is for the normal and Digital Deluxe Edition of the game too. The latter goes for a little more in price but does offer up a digital artbook, game soundtrack, more avatars to use, in-game filters, and some wallpapers to enjoy with the Vertigo look and feel to it all. Nothing too fancy to write home about but it will help the creators bring us more if this one takes off and blows everyone away.

Ed Miller, a writer, came out unscathed from his car crash down into Brody Canyon, California.

Even though no one was found inside the car wreckage, Ed insists that he was traveling with his wife and daughter. Traumatized by the event, he begins to suffer from severe vertigo. As he starts therapy, he will try to uncover what really happened on that tragic day.

Prepare yourself for a most disturbing investigation inside the human mind: truth is sometimes worse than madness.

Crafted entirely with in-game footage, this new story trailer introduces the writer Ed Miller, a car accident survivor suffering from intense vertigo. Convinced he just lost his wife and daughter in the crash, Ed starts therapy and reluctantly begins confiding in with a psychiatrist: doctor Julia Lomas. Julia will have to fight against Ed’s reluctance to dive deep into his memory and find out the hidden truth. Players will also have the chance to follow the Cerro Lake’s sheriff’s investigation as he tries to solve this mystery.

Alfred Hitchcock — Vertigo is an invitation to discover more about this dizzy spell and its origins. The game is a true introspective experience that will challenge the players’ own sense of sanity.

Alfred Hitchcock — Vertigo is being developed by Pendulo Studios and will launch on December 16th 2021 on PC. The game will come out in 2022 on PlayStation 5, PlayStation 4, Xbox Series X|S, Xbox One consoles, and Nintendo Switch.

On top of this, Faye and Petronius the cat avatars will be offered as pre-order bonuses.

Were you expecting to get the same story we had in Vertigo from before or are you glad to see it is a very different take? Do you think we will get similar story beats just with the new twist to it all? How do you suspect it will all play out when the game is said and done? Give us those thoughts and theories down in the comments and then discuss it you so wish to. We will keep sharing all that we can for Alfred Hitchcock — Vertigo, so please keep checking back for all of that and everything else we have to offer up along the way.