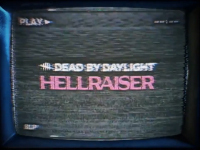 There has been a bit of a stir recently for Dead By Daylight with some content going away and other tidbits getting teased out there. For our purposes here today, and as the visuals and headline let us know, we are going to focus on what Behaviour will be adding into the game soon and not what they are taking away. More so, since it looks like the Hellraiser IP will be heading into Dead By Daylight soon with the few teases and now confirmation that it will be the case. Yes, it looks like the next horror icon to stalk the game will be from that IP and most likely Pinhead. That is the most iconic of the characters from the films, so it makes a bit of sense for that to be the case here.

Sadly, there is not much more to go on for that, as this is all we have for Dead By Daylight today in this regard. It is vastly better than the cryptic teases that some were speculating were going to be this crossover, and now it is completely confirmed. All from the following video clip that was released and placed over the more cryptic version that had some trying to see what was hidden. The Dead By Daylight community went to some great lengths that felt like leaps of logic at a few points to get here. Now we have it confirmed and just need to wait to see how the character will be added in and which of the survivors we will have made the leap over too. That should be a short matter of time and nothing too painful for now.

We have such sights to show you! Hellraiser… coming soon.

Are you excited to see that Hellraiser will be having a solid presence in Dead By Daylight or did you hope for a different IP here? Do you think this will make up for the loss of the Stranger Things content that is coming? Do you think we will see more than just Pinhead in the mix and could we get a few of the Cenobites to select in this one? Let everyone out there know what you are thinking and then feel free to discuss it all. If and when there is more to share for Dead By Daylight, know that we will have it all here. Just be sure to keep checking back for all of that and much, much more.