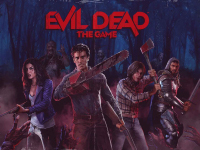 A slight delay for Evil Dead: The Game is here with this addition to the Evil Dead IP hitting in 2022 now

I know I was hoping this was not going to happen, but it looks like we are going to have to wait a bit longer for Evil Dead: The Game to grace all of our systems out there now. It has been hit with a bit of a delay. This is something that is a little odd given that Saber Interactive only stated that we would be seeing the game in 2021 and now we have the update that Evil Dead: The Game will be dropping in February of 2022. That is oddly a bit more of a specific timeline than we had before this delay. Weirdly enough to go along with it, there also seems to be some exciting news to help explain away the delay we are now going to see for this game.

There is the obvious statement of "more polish" that we have with all of these delays, but it looks as if we are also going to be getting a single-player mode in Evil Dead here too. I have a feeling it is going to be a way for those without constant online friends to be able to play the same game, but I will hope on my Necronomicon that it could be a solid campaign mode mixed in too. It will also be a way to get more characters from the IP in there and show off some new gameplay along the way. This could also allow the team to be able to include elements from the upcoming Evil Dead film too. Given the timeline that is on, it could be releasing around the same time or just in time for a new pack of content to be dropped into the game without it feeling like a cash grab.

Evil Dead: The Game will be releasing in February 2022
Hey groovy gamers, we're targeting a new release date to give the team some extra time for polish and to ensure this is the ultimate Evil Dead experience you’re all waiting for! pic.twitter.com/c5I4OSQshA

This additional time is also allowing us to implement a single-player option that will let you enjoy the game when you are without your co-op compadres.

We want to thank everyone for your understanding and support and please stay tuned for more information about new character updates, pre-order availability, and the next gameplay video featuring Bruce Campbell.

How heartbroken are you that we will have to wait until February of 2022 now to get more Evil Dead in our lives? Do you think it could give us some of the new film in the mix or will that be further down the line for the game? Do you think this could be a full campaign mode for the game we are going to get or will it just be a way to play with AI bots running around for the other characters in the match? Give us all of that feedback and then let the discussion fly down in the comments. We know we will have more for Evil Dead: The Game and we will have it all here for you as it comes. You will not want to miss out on that, so be sure to keep checking in on the site for all of that content.