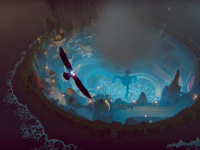 Fans of The Falconeer can get ready read to have a bit more to the game to play with the next expansion on its way on August 5th here. That would be fans that have been enjoying it on the Xbox One and PC up to now, but will also include those looking to get in on the game on the PS4, PS5, and Switch too. It looks all that want in on The Falconeer — Edge Of The World will have their chance, just one will have a bit of a head start with how Wired Productions has released it all out there so far. It is what it is, but the DLC and new versions of the game all land on the same day so we could see a massive resurgence of the title at the same time. Amazing news indeed.

This new DLC for The Falconeer will boost a bit of the level cap for the game up to 24 for those that have mastered things already. There will also be a few more locations, classes, and missions to take on with our new mounts too. Given that we will have a new weapon in our armory here, these will be put to the test for certain and get us all back in the fly of it all. Have a look at the new bits we can expect in The Falconeer in the following trailer that takes us to a few new heights here. It looks like we have a bit more darkness to experience or it could just be the pallet that we have of it all instead. I will let you go to have the fun for yourself right now.

The Falconeer — Edge Of The World DLC

Take on epic new missions, embark on new adventures, and discover stories that will lead you to spectacular new locations, in Edge Of The World, an extensive new expansion for BAFTA-nominated The Falconeer — Available August 5th for PC and the Xbox family of devices.

The Edge Of The World DLC will also increase the level cap from 20 to 24 through various ancient items that can be discovered.

This DLC is available for individual download on PC and Xbox, and will be included by default in the Warrior Edition, which will launch on PlayStation 5, PlayStation 4, and Nintendo Switch for the very first time on the same day.

Are you fully ready to get back in the saddle for The Falconeer or will you finally be able to dive into it all here soon? Do you like the ability to be able to jump up a few more levels or will you just be sliding into it all as soon as it is available? How do you think the new weapon will fully work and will it make things work a bit smoother than we have had already? Let us all know down in the comments what you think and then feel free to discuss it all if you so wish. If there is more for The Falconeer to come out there, we will share it all here for you. Be sure to just head back to the site to see and hear it all as you so wish.