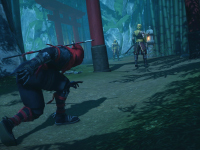 Here we go with even more gameplay to digest for Aragami 2 and this time we are getting to the core aspect of the game. That would be the stealth mechanics and how Lince Works have kicked things up a bit for the game since so many fell in love with it the first time around. That and now we are going to be taking our Aragami into some real fights this time around, if we fail to be sneaky, and we are going to need to be better at all of that too. That would be another great thing that we have highlighted here for the game as we get closer to that September 17th date when the game will hit the PS4, PS5, Xbox One, Xbox Series X, and PC. Something that has not been all that sneaky to get out there for us, but that is perfectly fine with us.

We are going to see some of the classic stealth come back from Aragami, obviously, but it looks like we have a lot more powers and tactics to use in the mix too here. The game is moving over to a stamina system instead of a cool down one and this will now allow for us to chain movements like a double jump and dash to teleport as we traverse the areas out there. The maps are going to be massive compared to those of the original Aragami and we are going to need to be able to move a bit quicker if we are going to get to our goals here. Something that should be made easier with the addition of many new Shadow Powers we will be able to unlock along the way and upgrade as the game unfolds. Of course, that is if you want to run the game in full stealth mode the whole time.

For those that want to have a bit more action in Aragami 2, there is a full combat system in the game now, and getting spotted will not result in an instant death for us. The system looks to be about as we would expect in a ninja-style game with the difference being that the NPCs will not wait to attack one at a time. That is the claim, at least, as the video we have does show that happening constantly in the scenes. It could just be how these enemies will be coming at us with the various others using their unique abilities and styles to close around us or take advantage of the area. Have a look and see as it is easier to see these enemies in motion instead of reading about how they could work. This is an early stage of the game, so things could pan out differently at launch.

Lince Works has given you brief glimpses at the gameplay but, now, the team is excited to take gamers deeper into the evolution of this stealth-action franchise. The new developer walkthrough showcases the completely new combat system built from the ground up for Aragami 2 and enhancements to the stealth gameplay established in the original title. Gamers will get a chance to experience this for themselves when the stealth-action adventure launches September 17, 2021, on PlayStation 4, PlayStation 5, Xbox One, Xbox Series S|X, and PC.

Aragami 2 will take the community and critically acclaimed experience of the first title to new levels. Stealth is the foundation of the Aragami experience and, now, players have increased mobility so that they can maneuver more quickly from shadow to shadow.

Also, when attempts to be stealthy fail, players are no longer helpless. Inspired by some of the best action games around, Aragami 2 employs skill-based combat where players must strategically engage their assailants. Aragami are brilliant assassins who are as powerful as gods when stalking from the shadows but, when face to face with enemies, they are vulnerable. Knowing when to strike, defend, or dodge will be key and this developer walkthrough gives gamers a look at all of this in action.

The original Aragami hooked fans with a stealth-focused game inspired by classic ninja experiences like Tenchu and rooted in the lore of a beautifully crafted world. The addition of the all-new strategic combat system takes what Tenchu made popular and elevates it to loftier heights. Even better, Aragami 2’s gripping narrative can be experienced in full completely solo or with friends as a co-op stealth-action adventure. The Aragami clan, known as Kurotsuba, must utilize their power as they attempt to fight back against the invading Akatsuchi Empire.

Will you be going in with your Aragami in full stealth mode or aiming to go in and slay everything that is still alive out there? How many segments do you think we will have where we will not be able to go in under the cover of night? Do you think that we will truly see the AI work the way as described or will it still play out as a one at a time kind of fight? Let everyone out there know what you are thinking out there and then feel free to discuss it all if you so wish to. As more for Aragami 2 is dropped out there, we will update everything here for you. Just keep an eye on the site and all of our announcements to be sure to stay up on all of it as it comes.