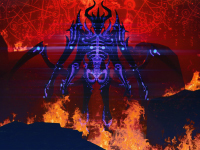 The day has finally come, or will be, and we will see Jupiter Hell hitting its final form on the PC. Yes, we have the official release date to hop into this turn-based roguelike that has been out there for a bit now. ChaosForge has had it out there for a bit now to make sure we are able to help get the bugs and fun parts ironed out. So, for some of you Jupiter Hell is not going to be new but for the rest, this could be something new to look at and get amped up for. Especially with how dark and creepy it is all looking from what we have had so far. Almost like the best mix of so many different visuals and gameplay in one solid title that is hitting on August 5th for those sticking around for that part of the update.

To go with this announcement for Jupiter Hell's release, we have a new cinematic trailer to take in and enjoy for it all too. Something that is a bit newer for those that have been left out of the loop for the game up to now, but still something to look at and enjoy as we wait. Unless you want to jump in and get in on the Early Access of Jupiter Hell before August rolls on up on us. It has those good DOOM and Dead Space feels for those that are looking for a feel before taking a chance with it all. Have a look at the latest for it all and see if it could be in your interests for now and if you will be joining those out there that have given a chance thus far. It does look quite a bit interesting to these gamers over here.

Do you have what it takes to survive the demonic forces of Jupiter in a game where turn-based tactics and roguelike collide? Jupiter Hell, from developer ChaosForge and publisher, Hyperstrange launches out of Early Access this Aug. 5th, 2021. It will be available on Steam, GOG, and Humble for $24.99 with a 20% discount at launch.

Set on the moons of Jupiter, the game pits a lone space marine against overwhelming demonic forces. The player will rip and tear zombies, demons, and unmentionable monstrosities, using classic weaponry such as shotguns, chainguns, railguns, and the trusty chainsaw. Sounds familiar? It should! Jupiter Hell is the spiritual successor to the 2002’s freeware roguelike phenomenon — DOOM, the Roguelike, later renamed to DRL for obvious copyright reasons.

Powered by the custom-built Nova Engine, the game takes the classic, turn-based roguelike gameplay and puts it in a detailed and dynamic 3D, 90s flavored sci-fi environment. Jupiter Hell stays true to the staple qualities of the roguelike genre: procedural level generation, providing endless possibilities for another run, character permadeath, and brutal, yet fair difficulty level. The players will die, learn from their mistakes, and proceed to make new ones in a new playthrough.

Have you been experiencing Jupiter Hell up to now or is this the first time you are hearing of it all right now? Do you like the look and feel you are getting from the trailer that we have and will it line up to the style it is putting out there? Do you like the titles mentioned and how it all flows or will this be a title that you might be skipping? Give us all of those thoughts and feelings down in the comments and then feel free to discuss it all. If there is more for Jupiter Hell to drop on you all, we will do so here for you. Just be sure to keep checking in on the site and all of our socials to see it all and keep up to date. Hopefully, we will be able to keep up on it all.