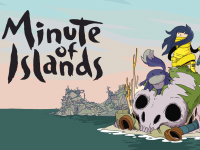 It has been a whirlwind of events and things here recently and one of those things that fell through the cracks for some was the launch of Minute Of Islands. This is that latest title to come out of Studio Fizbin and Mixtvision for all the consoles and PC out there. Minute Of Islands had the timing to launch during some rough times for making sure it did not fall into obscurity out there, but that does not mean we did not take notice. We took notice and gave the game a good play through to see what the talk was all about. Now you can take that as a reminder the game is out there and also see what we thought of it all. Here is our review of the game and how it held up during everything going down.

The world is not in great shape here in Minute Of Islands. There is a blight out there and it is killing off a good chunk of the living beings to the point many have fled to a place where they do not have to worry about breathing. Mo, on the other hand, has been tasked with the glorious purpose to try to keep things going and the giants that power the planet alive. Armed with the Omi Switch, Mo sets out to make sure that continues but also runs into many different memories along the way that could take a toll and kill this purpose along the way. By the gods, Minute Of Islands is an insanely slow game to play. Not something that is the norm for a platforming title out there and also not something that falls into a good place of it all. I am not talking about how the story and such plays out, but I am also talking about some of the traversals and need to focus on things that are overly obvious out there. All of which felt like it was more to pad the gameplay time more than add anything to the experience. There is no need to have a small cinematic play every time Mo moves to crawl into a cave or to highlight that we achieved the goal we have been working minutes toward. None of these are game-breaking, but it was something that frustrated me every time in Minute Of Islands as it made no sense to have. Sure, Mo is going to look before exiting a cave crawl, clean off the coat, and tuck the arm away but does it need to happen every time and take a long time to show? Especially when you have to do some of these movements back-to-back in the game. It felt unneeded after the third time, but persisted much longer than that.

The above could have been overlooked, in terms of gameplay, if there were also some solid puzzles mixed into everything for Minute Of Islands at the very least. There are some in there, but they range from the overly obvious on how to solve to "might as well brute force this" with no range in between. I know that one of the bigger highlights for Minute Of Islands was the story being told, but with no good substance between the story segments, it became a rough experience to fight my way through. Thankfully, none of the puzzles caused any major roadblock along the way, but just like the pacing of the game, they felt like they were more just there to extend things out and sadly did not offer up much toward the game's experience. Almost as if this would have worked out better as an animated tale instead of a video game. Harshness aside, I do have to praise Minute Of Islands for using an amazing art style and look to everything in the game. You can spy how it looks in some of the stills and trailers, and it holds up well throughout the entire experience. It truly feels like playing an animated show at some points and not in a goofy or classic way to it all. More along the way of something more fitting of the art in Minute Of Islands. Something that could be a bit off-putting to some given the subject matter and elements that are highlighted. There was an amazing balance between it all that it helped keep my attention in the game when the action and slower beats began to lose my interest in it all. Definitely, one of the shinier parts of the overall game to behold here.

While I am not going to spoil any part of it here, the overall story for Minute Of Islands was also very intriguing and heartfelt on this side of the screen. The warning at the start of the game does try to set this up, but how everything unfolds it still hits fairly hard as we see the progression of Mo and the family along the way in this dark setting. Not only that, but some of the deeper themes that start off subtle but gain more and more presence as the blight of it all seeps into Mo's lungs. It turns what seems to be some interesting platforming into a little more of a soul-search to me and not something you can spy from just the visuals of it all. It is not an overly new concept, sure, but it was something that hit fairly hard during my play through and kept me going until the bitter end of it all. I cannot emphasis on how slow the gameplay of Minute Of Islands is when it comes to the genre and style of it all. It is something that is needed to be known from the start or I can see someone losing interest fairly quickly with it. This would be a terrible thing as the gameplay is fairly solid and offers up some amazing visuals and story to it all. It is just hard to go through expecting there to be a faster gameplay to enjoy as we jump from platform to platform or climb the ladders in the area. Going in knowing that, Minute Of Islands could be an amazing experience for you. This is just not going to be a video game that is going to capture everyone easily. Many might find it much easier to just ingest the story of it all in a different way and get the appreciation that way instead.

Minute Of Islands was developed by Studio Fizbin and published by Mixtvision for the PS4, PS5, Xbox One, Xbox Series X, Switch, and PC on June 13th, 2021. A PS4 copy of the game was provided by the publisher for reviewing purposes.