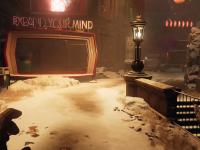 It looks like each time we get to see Deathloop, it feels like things keep shifting and changing each time. It kind of fits the idea behind the game here and maybe how Arkane Lyon has been working things up to now. Also, how it seems some of the gameplay will flow in Deathloop when it hits the PS4, PS5, and PC on September 14th. Given that we have only seen the loops playing out and the idea that we need to take everyone out there in the world in one shot besides being able to carry things over between each death. None of which we have heard or seen in any real form before this month's State of Play. Now we do…

Here we go with a bit more of a breakdown of Deathloop that shows off how this one is a lot closer to the team's other title Dishonored. Just with more guns and in a futuristic setting instead. That being the guns and tech we will get to use to help take down all of these villains out there in Deathloop and collect more of the mystical energy that will let us carry things over between deaths besides just our memories. Given that one of the powers allows us to teleport and the other to rewind a death twice between resets, it will be nice to keep them all flowing. It would have been nice to find out how much we will need to keep each between them all.

Another interesting aspect we get more on in Deathloop, is that we will randomly have another character hunting us in the loops too. Sometimes it will be another player hopping in to take us down but if we want to go in on this offline, it can be an AI bot to do the same thing. The weird aspect is that we see this mission in a campaign style of play and then things playing out in a bit more of a cinematic aspect too. Does this mean that we just need to be lined up in the sights of the other player to see it play out in Deathloop or will it just be when the player pulls the kill shot? I guess we will just have to wait a little bit longer to find out.

Prowling stealthily across rooftops or tearing through the streets of Blackreef in a hail of bullets. Finding a hidden entrance or busting in through the front door. There are many ways to reach your targets in Deathloop. Our target in this extended look at the game is the Visionary Aleksis “The Wolf” Dorsey. Watch Colt infiltrate his well-guarded nightly party and take him down!

Launching September 14, 2021 on console exclusively for PlayStation 5 and available on PC.

If At First You Don’t Succeed… Die, Die Again.

Do you see more going on in Deathloop now that the team has had more time to work on it or was this something expected back when the original announcement came out? Do you think that when another player takes over the character it will play out like a normal match kind of deal or will it end in a cinematic as the video alludes to? Do you see many of the influences and gameplay from Dishonored here or am I just placing that in there due to the studio? Let us all know what is on your mind down in the comments and then feel free to discuss it all. If there is more for Deathloop, we will certainly add it to the site for you. Just keep your eyes locked in here and you will not miss a thing.