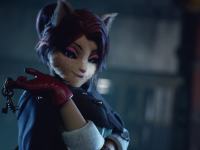 The release date for F.I.S.T: Forged In Shadow Torch is set with F.I.S.T coming at us this coming September now

The little indie title F.I.S.T: Forged In Shadow Torch is going to be coming at us all on the PS4, PS5, and PC extremely soon after the announcement during the most recent State of Play out there. After quite a bit of silence and little news from TiGames about it all, we are now slapped in the face with the release date now. We can now get ready to pick up and pre-order F.I.S.T: Forged In Shadow Torch for this September now. September 7th for those looking to see the exact date of it all. Just so we are not burying the lead at all for now. We did need to have a reason for you to keep reading before heading to the new footage we have for the game too.

Now that we have the date for F.I.S.T, we can take a look at some of the new things to expect for the game. Most of the gameplay is about the same as we have had before, but we do get to see a few more of the characters we will get to experience out there. One of them seems to be a whole new character we have yet to see and looks like will be there to take out just as many enemies as we are in the game. Not to mention the fact that we will need them to get out of a tight spot in the story of F.I.S.T at one point too. It could be early on or a bit later in the story too. It is hard to tell from it all, but it is an amazing scene to see play out here and get us all hyped for the game to finally hit us in a few months.

Action Adventure game F.I.S.T: Forged In Shadow Torch will be released on PS5 and PS4 on September 7, 2021 for $29.99. Pre-order the game digitally from PlayStation Store now to get 10% off for all the PlayStation Plus members!

Have you been counting the days until we had a chance to see F.I.S.T hit the PC and consoles out there? Do you think we will need to be rescued a bit later in the story or will this be how we get out and acquire the weapon we will be using out there? Do you think any of these new characters will have larger roles in the story or will they be out there just to push us to the next scene of it all? Let us all know down in the comments what your thoughts are and then feel free to discuss it all. If there is anything more for F.I.S.T: Forged In Shadow Torch, we will share it all here for you. Just be sure to keep checking back for all of that and much, much more.