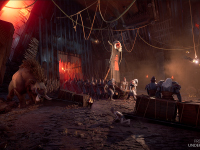 The Lord Of The Rings: Gollum has a little more to see with some hype around how Gollum will encounter things we have never seen before

The tease we had last week for The Lord Of The Rings: Gollum has finally paid off and we have a little more to look at for the game. We still have to wait until 2022 to get to play it, sure, but that does not mean that Daedalic Entertainment did not give us some things to take in to get hyped about. We have seen things that have shown it off to be a solid stealth game in this universe, which is further driven home here, but there is also talk about some parkour mixed in to it all as well. I have a feeling that is a way to describe how Gollum will be moving about the world and staying out of sight of the Elves, Dwarves, Orcs, and that pesky Wizard out there. Most of which we have expected here, but now have a few new scenes to show off how he will be moving about the world. All in a way that looks close to a few other titles like Styx out there. That is a good thing here.

In addition to seeing some of these new bits of gameplay for Gollum, we have a few new characters to look at as the team interprets their descriptions from the books. Characters and locations out there, if you did not think the films that came out did not do it all justice before. It is going to be a bit odd when it comes to the characters we have seen, like Gandalf, but it does give them the chance to bring some of the other characters that had no screen time at all. Something that the hardcore fans will have been looking for, but the more casual fans will just get to enjoy for the first time when Gollum lands. You can take a look at all of these new bits just below with the developer describing things. Maybe we will get some real gameplay soon to help us better understand it all, but we will take what we can for now.

The Lord Of The Rings: Gollum — A Unique Promise

Harald Riegler, Producer at Daedalic Entertainment, provides more details about The Lord Of The Rings: Gollum. In this action-adventure game combining stealth and parkour, you play as one of the most complicated and iconic characters created by J.R.R Tolkien. Tormented and constantly switching between two personalities, Gollum is a different type of “hero” and the central character in this story that takes him from Mordor to the depths of Moria.

The Lord Of The Rings: Gollum will be available in Fall 2022 on PC, PlayStation 5, PlayStation 4, Xbox Series X|S, Xbox One, and Nintendo Switch.

Do you think that Gollum will have some real parkour skills or is that just how we describe all of the climbing and jumping in the game? Did you expect to see these characters from the books here or was it a nice surprise to note down for now? Will there be the same level of backlash other titles have had for not making the characters look like the film counterparts or will this fandom be more forgiving? Give us all of those thoughts down in the comments and then feel free to discuss it all as you will. When there is anything more to share for The Lord Of The Rings: Gollum, we will add it all to the site for you. Just keep coming back here to check in on all of that and much more as the days flow out there.