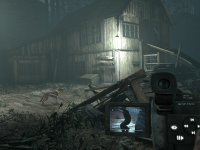 Here we go with the next version of the Blair Witch title out there again with the VR version dropping on us as you are reading these words. We all knew it was coming and I know I was under the impression it would have worked out better for Bloober Team to drop it later in the year, but they are going to do what they want. Even if that does mean that we will be waiting a bit longer to get the PSVR version of Blair Witch out there. That is slated for later in the Summer, so we can look to see it all by late September at the latest. As long as they want to keep with the timeline that they have laid out now and still make in time. Fingers and sticks are going to stay crossed to make sure that still all happens.

While it is interesting to see that Blair Witch is going to be hitting the VR platform out there, it does look like there will be a few more updates coming to it all here too. Most of which will be coming for Bullet out there and a few more interactions mixed in for fun. Almost to the point of making a weird dog petting simulation with a horror setting all around it. A few of them will add to the gameplay too with Bullet being able to track by scent and change up collars. Something that will come in handy with the new creature encounters we are going to have and other interactions we will have with the Blair Witch. Something that can also add to all of the other marker drawings we can have in the game while throwing new objects and searching for new items out there. Have a look at a few of the new features in the latest video or just download the version of the game right now.

Blair Witch: Oculus Rift Edition, based on Lionsgate’s film The Blair Witch, offers enhancements to the Blair Witch story that has been redesigned specifically for the VR experience including better models, improved lighting, further draw distance, a backpack, and improved AI for the trusty dog companion, Bullet.

The VR version of Blair Witch boasts environments that have been redesigned for more interactivity and to accommodate new creature encounters, a new control system, and mechanics for your companion dog such as petting and fetching gestures to help immerse players in the story.

Blair Witch is launching for PSVR later this Summer.

Did you remember that Blair Witch was coming to the VR platforms or was this the reminder that we all needed right now? Do you like the new features and additions that will be coming in here and do you think we will get to see them all added in to the base game too? When do you think we will see it on the PSVR and will it be closer to October to hit up the Halloween time for it all? Let us all know what you are thinking down in the comments and then feel free to discuss it all if you so wish too. Keep an eye on the site for all for Blair Witch and many other horror titles that we might get. We are getting closer to that time of year, so we know it will start flowing out there extremely soon…